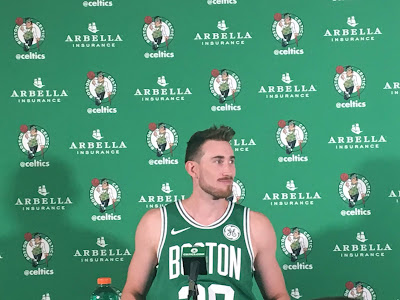 CANTON -- For most Kyrie Irving and Gordon Hayward, being back in their respective uniforms at High Output in Canton on Monday for Celtics Media Day was a tremendous thrill.

The two biggest Celtics acquisitions of 2017 will compete alongside each other for an exhibition game on Friday for the first time in nearly a year and have wasted little to no time in preparing for the 2018-19 season. Irving, who said his health has been at 100 percent for close to two weeks now, has played in pickup games with his the rest of his teammates.

He also spent a chunk of his summer with veteran guard Jamal Crawford, and says the time spent with Crawford went a long way in his final steps to recovery.


"I had great opportunities this summer to be around some great people," Irving said. "I was up in Seattle for about 18 days or so. Jamal Crawford did a great service for me by putting together some runs up there for me to get re-acclimated to the game -- knowing what I was coming off of in terms of my injury. It was just great to be up there and get some quality runs in and just really get back into the game.

"I missed it so much. For it to be taken away the way it did at the timing of everything wasn't ideal. It was hurtful, honestly, because it was an uncontrollable thing and to go through it was a learning experience but it only helped my evolution as a person and as a player."

Hayward on the other end, spent the opening minutes of his time at the podium reflecting on the beginning stages of his recovery process. Having to watch his team compete throughout the regular season wasn't easy for the veteran forward, however, it was an experience he got a chance to share with his starting point guard when Irving joined him weeks before postseason.


"It was very difficult to have to watch basically the whole year, last year," Hayward said. "And then I watched the playoffs with him (Irving) too, so I know it was hard for him to sit there as a competitor -- the last thing you want to do is to be forced to be on the sideline. But I think that gave some of the guys on the team some valuable experience and we're both looking excited for this year to get started."

That experience, Hayward says, not only made guys like Jayson Tatum, Jaylen Brown and Terry Rozier better players, it's also gave them an opportunity to compete on big stage -- one he has never even stepped on throughout his eight-year career.


"[For] all three of those guys, you can teach experience and for them to have that playoff experience, go through the whole year and then in the playoffs have even more responsibility with Kyrie being out, you can argue they're more experienced than I am," Hayward said. "Going to the Eastern Conference Finals, that's great for our team.