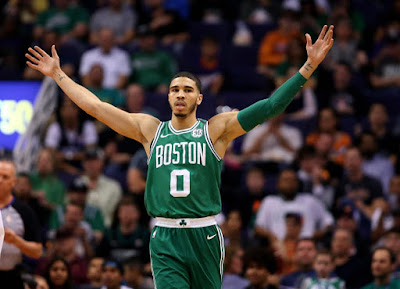 In ESPN's third installment of their NBARank list of the 100 top NBA players for the 2018-19 regular season, Celtics forward Jayson Tatum landed at the #24 spot.

Tatum, 20, is entering his sophomore year professionally after a successful rookie campaign, that included dunking over LeBron James in Game 7 of the Eastern Conference Finals.

Here's what ESPN had to say about Tatum's selection and cracking the leagues's top 25.


"Tatum evolved from role-playing starter into playoff closer, calmly averaging 18.5 PPG in 19 postseason games, looking like a longtime star in the process. With Kyrie Irving and Gordon Hayward back, it will be interesting to see if Tatum is asked to take a backseat.

Given Brad Stevens’ willingness to put his five best players on the floor regardless of position, I wouldn’t expect Tatum’s minutes to decline. He can play some small-ball 4 and has proved he can remain efficient without volume. With that said, it wouldn’t be surprising to see him get fewer opportunities given Boston’s multitude of weapons." — Mike Schmitz

Tatum, who led his team in scoring during the Celtics playoff run, fell one point shy of tying the all-time record for the most postseason points by a rookie. After being compared to such Boston legends as Paul Pierce and even Larry Bird, Tatum is not satisfied with just being a rookie of the year finalist.

The Celtics forward, who averaged 13.9 points during the 2017-18 regular season, has been seen working out with Kobe Bryant and Penny Hardaway this past summer.

Don't be surprised if Tatum is the second best or even leads the Celtics in scoring this season, when he takes his offensive game to another level, despite saying he doesn't mind coming off the bench or starting.

The Celtics deep roster and offensive weapons, will make it that much easier for Tatum to score at the rim or behind the arc, especially from the corner.

Quick note to mention, for those wondering where did Tatum end up on Sports Illustrated's Top 100 list? I'm glad you asked, that would be #37.