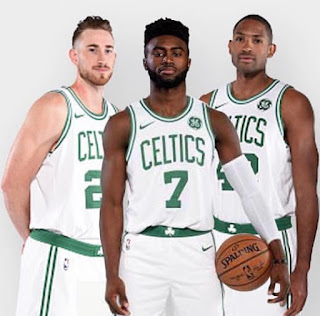 ESPN has released the second installment of their NBARank list of the top 100 players from spots 31-50 on Tuesday, where three members of the Celtics roster were named.

Celtics forward Gordon Hayward was ranked at #40 before this upcoming regular season, after being out all of except five minutes of the 2017-18 campaign with a broken ankle.

The placement would suggest that the jury is still out when it comes to Hayward returning to his All-Star form.


"Peak Gordon Hayward — the do-it-all 2017 All-Star who ended Utah’s playoff drought — is likely a top-25 player, but season-ending injuries bring unknowns. The Kyrie Irving/Jaylen Brown/Jayson Tatum/Gordon Hayward/Al Horford lineup is going to be its own kind of switching, shooting and smothering death trap for teams if Hayward returns to form. And Hayward being great again is the real key to both that fivesome and Boston’s chances to compete for a title right now." — Tedsco

Though all signs are pointing in a positive direction when it comes to Hayward saying he's ready to go, as the Celtics are set to begin training camp next week, this ranking may be appropriate for now (even though Sports Illustrated ranked him at #25 last week).

Despite some of Hayward's explosiveness or mobility not being quite where it was pre-injury, you can't take away his basketball IQ or his ability to pass and shoot.

All eyes will be on Hayward during the 2018-19 season to make a comeback from one of the most gruesome injuries ever seen on a basketball court.

Jaylen Brown finished three spots ahead of his teammate at #37 on ESPN's NBARank list. The Celtics swingman will look to improve yet again in his third year after a successful sophomore season, where he averaged 14.5 points (more than double as a rookie), 4.9 rebounds and a steal per-game.

Brown drastically improved his three-point shooting percentage in the playoffs from 21.7 percent in 2017 to 39.3 percent during the Celtics recent playoff run, as he was the team's second leading scorer throughout the postseason.


"For as outstanding as Jayson Tatum was in the playoffs, Brown was no slouch, averaging 18.0 points with a 56.3 true shooting percentage. With Irving and Hayward back, it will be key for Brown to excel defending multiple positions and continuing to make spot-up 3s, building on a career-best 39.5 3-point percentage last season. Likely to play some small-ball 4, Brown also can polish his decision-making, as he holds more career turnovers than assists. Even if his offensive role levels out, Brown remains one of the best young two-way wings in the NBA." — Mike Schmitz

With his athleticism on both ends of the floor (being a good perimeter defender, while being able to shoot and take it to hoop with ease), Brown has transformed from being a raw talent to a rising star in the making at the age of 21 (will turn 22 in October).

In case you missed it; Sports Illustrated ranked Brown #47 on their list. What a difference a week makes.

Al Horford rounds out the trio of Celtics teammates ranked today by ESPN, at #34. Big Al showed his worth during the postseason, as the elder statesman lead a young inexperienced team to Game 7 of the Eastern Conferance Finals.


"'Average Al’ led a Boston team that was less than six minutes from the NBA Finals, and his ranking reflects the respect our panel continues to have for him. But it also reflects the diminished value of big men, and it acknowledges that Horford is already 32 and likely to play a somewhat reduced role on a loaded Celtics roster." — Royce Webb

Horford has age like a fine wine, as he continues to shoot from the behind the arc, pass like a guard, while playing small ball and proving why he's damn near the perfect big man in today's NBA.

Though Horford may lose minutes to the returning Aron Baynes and Daniel Theis and possibly rookie Robert Williams (depending on development), there's no doubt that the All-Star will close out games due to his defense and clutch shooting.

For those keeping track at home, Horford landed at #17 on Sports Illustrated's list, as the overall highest ranked Celtic.

Where ever you have Horford ranked on your own personal list, you can't deny how valuable he's been for the Celtics over the last two seasons.