Gordon Hayward on his comeback season: 'My goal is to help us get that banner' 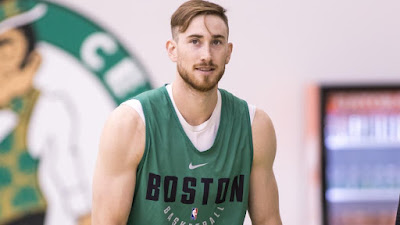 Gordon Hayward is ready to play.

He reassured reporters at the Celtics new practice facility in Brighton Thursday that he has fully recovered from the gruesome ankle injury that left him sidelined for an entire season. Hayward also reminded everyone that while he's back to playing again, he still has ways to go before he can consider himself back to basketball-shape again.


"I would say I'm basically 100 percent," Hayward said. "There's certain things that I think are going to take time. Even if I was 100 percent healthy, I'm not 100 percent as far as basketball-wise, just because I haven't played in a year.

"I'm trying to figure those things out. The last step for me as far as from a physical standpoint is a little explosion, that little last juice bounce that you get. So that's going to take me the longest time. But like I said, for the most part, I feel very good."

Heading into training camp, things are back to normal for Hayward. He's more than excited to get back to work alongside his teammates and isn't concerned about starting lineups, his role or how he's going to fit in with teammates he hasn't played a game with in almost a year.

Instead, Hayward is focused on the bigger picture -- competing for a title.


"[Being in the starting lineup is] not something I'm worried about at all," Hayward said. "We're worried about winning and putting another banner up behind you. We have so much depth and so much talent it doesn't matter who starts for me. My goal is to help us get that banner."

Click the video below to find out what else Hayward had to say about his recovery.