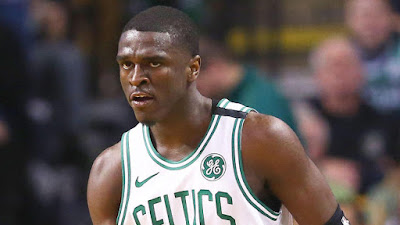 The Celtics were helping Jabari Bird get mental health treatment before his September 7 arrest, according to the Boston Herald.

Steve Bulpett, of the Herald, first reported Monday on sources close to the situation stating the actions that led up to the Bird's domestic violence charges were deemed "out of character." But that the reserve Celtics guard was already dealing with emotional issues in the weeks prior to the incident.

Bird allegedly strangled his girlfriend at least a dozen times and kept her against her will over a four-hour period. The woman told police she was kicked, thrown against a wall and was only able to leave after Bird passed out with "seizure-like" symptoms.

On Tuesday, a source confirmed by ESPN's Marc Spears, that Bird was already receiving treatment from a Celtics doctor and that medication might have played a role in the alleged attack.

According to the police report, the woman states that Bird strangled her until she went "limp," then allowed her to catch her breath to begin choking her again after they got into an argument at Bird's residence over her whereabouts.

While the woman was being treated for her injuries at a Boston hospital, Bird was undergoing a psychiatric evaluation at a separate facility, which lasted from the time of his arrest until he was arraigned on September 13.

One source close to Bird says they were aware that he was recently experiencing, "panic attacks and things like that. It wasn’t a long-term thing, but everyone knew. The Celtics knew there was something going on and he was being treated." [Boston Herald]

Another source said, "This wasn’t one of the domestic-violence situations you usually see where someone gets jealous for one thing and loses control. There was something deeper going on here with (Bird). This was a bad situation." [Boston Herald]

For the time being, the Celtics are working with the NBA, while the league conducts their own investigation that could result in Bird's contract being voided, which is at the very least worth $1,349,383 of guaranteed money this season.

Bird released his own statement following his arraignment last Thursday, where he does not mentioned the alleged victim.


"I'm taking some time away from the team as I deal with my legal and medical issues," he said. "I apologize to my family, the Celtics organization, my teammates, the fans and the NBA for the unnecessary distraction that I have caused. The information that has been released does not tell the full story. I do not condone violence against women. I am hopeful that in due time and process, I will be able to regain everyone’s trust."

The Celtics drafted Bird with the 56th pick in the 2017 draft and he spent his rookie season on a two-way contract before signing a two-year deal back in July.