Ray Allen on his years in Boston: 'Most important time in my life' 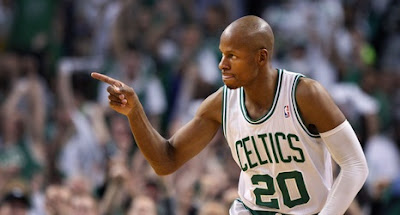 On the eve of his induction ceremony into this year's Naismith Memorial Basketball Hall of Fame class, Ray Allen reflected on his time with the Celtics.

Allen, who famously left Boston to join forces with the rival Heat back in 2012, admitted earlier this week that he didn't expect his former Celtics teammates to congratulate him on making the hall. Thursday evening Allen added he hopes those same teammates will remember the time they spent together in Boston -- calling it the most important time of his life.

Although he understands why some of his ex-teammates from the 2008 title team are still bitter, Allen reminded them that at the end of the day the NBA is a business and that it's important for a player to know when it's time to ultimately move on.


"Now, I do understand the angst that people have toward me because they loved [the title team] so much, because I was part of that team and I was part of everything that they did as far as winning," Allen said. "But, like we all know, it becomes such a business that you ultimately have to decide when it's time to fold up the tent. You gotta move on. And there's so many different factors in play."