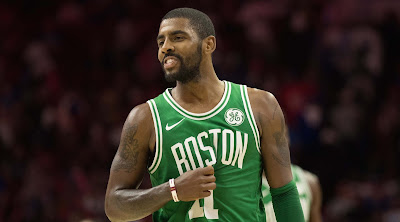 ESPN revealed the fourth installment of their NBARank of the top 100 players for the 2018-19 regular season and Celtics All-Star guard Kyrie Irving has landed at spot #20.

Here's what the 'worldwide leader in sports' had to say about Irving being rated the highest Celtic on their list and four players ahead of teammate Jayson Tatum.


"As a young star, Irving charted as high as No. 8 in NBArank based on his immense potential. Now he’s settled in as a top-20 player because he has averaged only 63 games played in his seven seasons — and his defensive effort is not a lengthy visitor. But at age 26, with a full return to health and the possibility of playoff heroics ahead, Uncle Drew can rise again." — Royce Webb

Clearly, Irving averaging less than 65 games played in a season since entering the league in 2010 has begun to affect his rating as potentially being viewed as a top-10 player, despite being the superstar the Celtics have needed to lead them back the NBA Finals since.

However, Irving skills can not be denied when healthy, that he is as unique as they come on the basketball court. His ability to make plays were one of the main reasons the Celtics went on a 16-game win streak to start the 2017-18 campaign without Gordon Hayward in the lineup.

According to Basketball-Refence.com, Irving was one of just three players last season to average 24 points per-game, while shooting over 49 percent from the floor, 40 percent from behind the arc and at least 88 percent from the free throw line, as the Celtics were at the top of the East until he went down in March with his knee surgery.

The Celtics, who made it to Game 7 of the Eastern Conferance Finals without Irving and Hayward, will look to take it one step further and play for a championship next June.

With Boston being heavy favorites to come out of the East this season, especially since LeBron James took his talents to Los Angeles, it's interesting that the team considered the 'best' to challenge most likely the Golden Warriors out West, doesn't have one player ranked in the top 10 by either ESPN or Sports Illustrated (Irving was ranked #17 on their list).

While ESPN has ranked seven Celtics players and S.I. six, more than other team on either list by far, it just goes to show how deep Brad Stevens' roster is, as he'll be entering what will be his most important season as an NBA head coach.

Though Irving and Hayward look to finally be healthy, all eyes will be on how durable each can stay for the Celtics throughout the course of the upcoming season, that hopefully means another banner being raised to the TD Garden rafters.