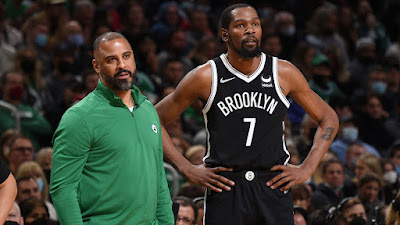 The Brooklyn Nets are reportedly finalizing a deal to hire suspended Celtics head coach Ime Udoka, according Adrian Wojnarowski of ESPN.
Following a 2-5 start to the season, the Nets and coach Steve Nash decided to part ways Tuesday afternoon and Brooklyn is looking to bring back Udoka as soon as the next 24-48 hours, per sources.

Suspended Celtics coach Ime Udoka has emerged as the likely next Brooklyn Nets head coach and his hiring could be finalized as soon as the next 24-to-48 hours, sources tell ESPN. Celtics will let him leave for another job.


Udoka, who is currently serving a one-year suspension for violating team policies, was an assistant under Nash with the Nets during the 2020-21 campaign before becoming the Celtics' head coach and leading them to the NBA Finals this past season -- posting a 51-31 record in his first year at the helm.
According to Shams Charania of The Athletic, the Celtics have granted permission for the Nets to speak with Udoka and won't stand in the way if he decides to accept another coaching job. Boston is also unlikely to seek compensation if Udoka is hired by Brooklyn or any other NBA team -- per Boston Globe's Adam Himmelsbach.

According to a league source, the Celtics are unlikely to seek compensation if Ime Udoka finalizes a deal with the Nets.