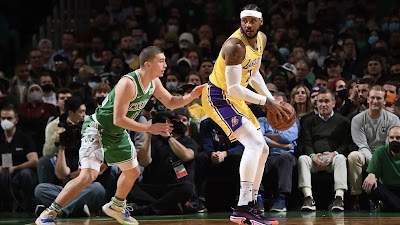 It appears the Celtics have no plans to sign Carmelo Anthony, at least for the time being, according to MassLive's Brian Robb.
The 10-time All-Star had been linked to the Celtics prior to Danilo Gallinari's confirmed ACL tear diagnosis earlier this week and reported rumors of Anthony potentially coming to Boston were "starting to gain traction" in the days since.
However, Robb reports that the Celtics "are not expected to have interest" in adding Anthony prior to the start of training camp, which is set to begin later this month.

"The Carmelo Anthony buzz was a hot topic this week after the rumors started swirling about the Celtics' interest in him last week. However, multiple league sources tell MassLive that the Celtics are not expected to have interest in bringing in the veteran for a signing ahead of training camp."

Robb also noted that the Celtics may add other players to the roster as the upcoming 2022-23 season approaches, but Anthony "isn't a priority" at this juncture.

"That's not to say the team is done shaping the roster ahead of the preseason, but Anthony isn't a priority at this point at names that could be brought in. Boston likes a lot of their internal replacement options, from what I've heard, and want to give those names the first crack at minutes."

"I could see the Celtics making that call later in the year if they need some scoring punch off the bench, but the logical first step seems to be giving the young guys more of an opportunity. That includes Sam Hauser as well as a number of big men in the running for roster spots."

While Robb isn't the first to mention Sam Hauser as a beneficiary of some opportunity in the wake of Gallinari's likely season-ending knee injury, longtime Celtics beat writer Mark Murphy also believes Boston isn't interested in Anthony's services either and could stick with what they got for now.

"I think they feel they want to find out what they've got. They're not in a hurry," Murphy said Wednesday. "If there's a trade out there, why not? But I don't think they're at all interested in Carmelo, for example."

Meanwhile, when asked in his mailbag about any other current free agents veterans such as Blake Griffin or LaMarcus Aldridge possibly being signed by the Celtics, Robb answered that he doesn't think any aging former All-Stars will be added to this current roster.

"At this point, it would surprise me to see any aging veteran free agents land with Boston during camp. Those guys will get a shot somewhere but don't see it coming with Boston."

While Anthony averaged more points (13.3) and playing time (26 minutes) for the Lakers this past season than Griffin (6.4 points in 17 minutes) and Aldridge (12.9 points in 22.3 minutes) respectively did in Brooklyn, they're also both younger than Anthony at 38 years old -- Griffin is 33 and Aldridge is 35.
Another longtime Celtics insider Steve Bulpett of Heavy.com says Anthony is definitely a good fit with this roster in term of replacing what Gallinari does, but he had "heard nothing solid on that front," when it comes to the C's showing any real interest.

"Carmelo's mindset is miles away from the guy just racking up numbers in New York. I believe he'd fit in well with a team that could need some veteran minutes in the playoffs. And, as far as criticism for his defense, well, Gallinari was not exactly expected to be a stopper," Bulpett wrote Thursday.
"What the Celts were looking for from Danilo -- and can get from Anthony -- is a shooter with a steadier hand."

With Hauser's name being thrown around as someone who's got a real shot at rotation minutes, look for Summer League standout Mfiondu Kabengele along with training camp invitees Bruno Caboclo, Denzel Valentine and Massachusetts native Noah Vonleh to get a chance to make the roster as well.
Joel Pavón
Follow @Joe1_CSP