Jay Larranaga will not be joining Celtics coaching staff 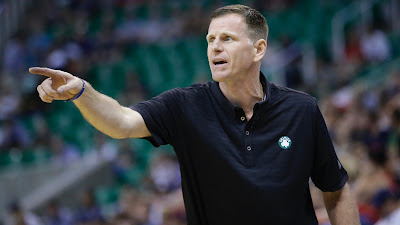 Jay Larranaga will not be joining the Celtics coaching staff, according to Sports Illustrated's Chris Mannix.
The former C's assistant was linked to the team earlier this week in a possible reunion after ESPN' Adrian Wojnarowski reported that Boston was granted permission by the Los Angeles Clippers to interview Larranaga, but it appears he'll remain in is current role as an assistant coach with the Clips.

Jay Larranaga will remain on Ty Lue’s staff with the Clippers, sources told @SInow. Boston received permission this week to speak to Larranaga. Larranaga, a valued member of Lue’s staff, prefers to remain in Los Angeles.


Celtics interim head coach Joe Mazzulla has been considering adding to his coaching staff and Larranaga was a familiar face within the organization after spending nine seasons on the sidelines as an assistant in Boston between Doc Rivers and Brad Stevens (from 2012-2019), two years of which he shared with Mazzulla -- who joined Stevens' staff in 2019.
While Larranaga, 47, will not be joining Mazulla's staff, a possibility of adding another assistant essentially still remains on the table, as the Celtics interim looks to see what his players may need.

"It's more about studying our environment and what we need to help our staff and considering what do our players need? What are they familiar with and what are they looking for on our staff?" said Mazzulla during his Wednesday post-practice presser.

As the youngest coach in the NBA at 34-years-old, Mazzulla takes over a Celtics roster coming off a trip to the NBA Finals -- following the suspension of Ime Udoka and top assistant coach from last season in Will Hardy becoming the head coach of the Utah Jazz this past summer.
Mazzulla's current staff includes assistants Damon Stoudamire, Ben Sullivan, Tony Dobbins, Aaron Miles, and D.J. MacLeay, as well as special assistant to the head coach Matt Reynolds.
The Celtics host the Charlotte Hornets Sunday afternoon at TD Garden in their first of four preseason games.
Joel Pavón
Follow @Joe1_CSP