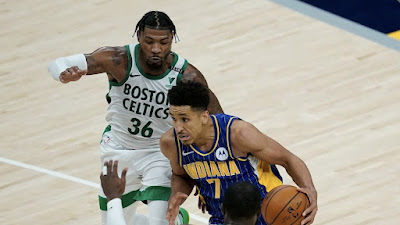 The Celtics were very active this off-season, following a run to Game 6 of the NBA Finals, by adding two quality veterans to their second unit who were playmakers and scorers.
One of those was forward Danilo Gallinari, who unfortunately tore his ACL last week and it remains unclear when he'll return, while the other is guard Malcolm Brogdon, who is set to be a difference maker for this current C's roster seeking to celebrate an NBA title.
Brogdon brings depth to a backcourt that includes Jaylen Brown, Derrick White, Payton Pritchard and of course Marcus Smart. In a recent interview this with Boston Globe's Adam Himmelsbach, Brogdon spoke about teaming up with Smart and what they both bring to the table.

"I think we have different strengths," he said this week. "He's an All-Defensive player and Defensive Player of the Year, and he's incredible in that facet, but I also think he contributes offensively. You've seen his game grow and seen him be able to knock down shots and create for his teammates.

"And we both can play on and off the ball. That's the beauty of us. We're smart, we have high IQs, and we're unselfish, so I think it's going to work well."

With the acquisition of Brogdon via trade in July, many questioned if Smart would remain the team's starting point-guard for head coach Ime Udoka. However, any speculation was quickly cleared up with reports that Brogdon was brought in to be a sixth-man -- a role he's more than excited to embrace.

"I envision being the sixth man, being a starter that comes off the bench," Brogdon told Himmelsbach. "That's really what it is, to be a vet that can slow the game down, control the pace, and help this team close games."

While Brogdon has battled with injuries throughout his six-year NBA career, he averaged 19.1 points on 44.8% shooting from the field, to go along with 5.1 rebounds and 5.9 assists in 36 games played for the Indiana Pacers last season.
At the introductory presser, Brogdon had nothing but positive things to say about Smart -- his new teammate -- and how they'll work together this upcoming season.

Despite Gallinari being out for the immediate future and with Carmelo Anthony, another veteran that could be potentially brought in, one thing is clear when it comes to Brogdon, Smart and the Celtics as training camp is right around the corner -- they want to win right now.
Joel Pavón
Follow @Joe1_CSP