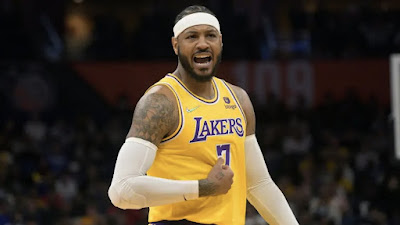 Stop me if you heard this before, the Celtics have lost a veteran forward to a potential season-ending injury, while another free agent with the same offensive skillset is still available and would cost less?
While reports that Carmelo Anthony possibly signing with the Celtics were "starting to gain traction" this week on the heels of Danilo Gallinari's ACL tear diagnosis, Mark Murphy of the Boston Herald doesn't believe the union with Melo is going to happen.
The longtime Celtics writer/insider, who is set to retire soon after 34 years on the beat, made an appearance on the latest edition of NBC Sports Boston's "Celtics Talk Podcast" with Chris Forsberg to talk about the speculations surrounding rumors of Anthony ending up in green to replace Gallinari.

"I think they feel they want to find out what they've got. They're not in a hurry," Murphy said of the Celtics. "If there's a trade out there, why not? But I don't think they're at all interested in Carmelo, for example."

Murphy also pointed out how the Celtics didn't even show the slightest of interest in 28-year-old power forward Montrezl Harrell, who reportedly agreed to a two-year deal with the Philadelphia 76ers just days ago.
Anthony, along with Gallinari have never been known for their defense, but are still capable scorers off the bench at this stage of their respective careers. This past season Anthony averaged 13.3 points in leading the Lakers' second unit while shooting 37.5% from 3-point range.

"I think what it comes down to is, they don't want to sacrifice their defensive principles," Murphy said. "You have to be able to defend. I'm not sure what it would look like the first time 'Melo had to switch onto a point guard."

Still, Murphy makes a valid point when it comes to Ime Udoka's elite team defensive schemes with Anthony possibly getting exploited by an opposing offense, as he only stands 6-foot-7 compared to Gallinari at 6-foot-10.
Another reason Murphy brought up on why the Celtics may pass on Anthony is; they could simply already have Gallinari's replacement in-house with either sharpshooter Sam Hauser or Summer League standout and Two-Way signee Mfiondu Kabengele.

"The one name that someone I talked to kept bringing up, which I thought was a little bizarre, was Kabengele," Murphy said. "They feel like they found something with him. He did have a great G League season, and he does, going back with the Clippers, have a little bit of NBA experience. So, they're going to find time for him.
"Sam Hauser had shoulder issues, so we didn't really see him a lot in Summer League. It's a great chance for him, so why not plug him in?"

For now it appears that the Celtics could wait until the trade deadline if what Murphy's saying comes to fruition. If they feel like this current group needs a boost off the bench aside from their other offseason addition and sixth-man in Malcolm Brogdon, it probably won't be likely a move is made before next February.
Joel Pavón
Follow @Joe1_CSP