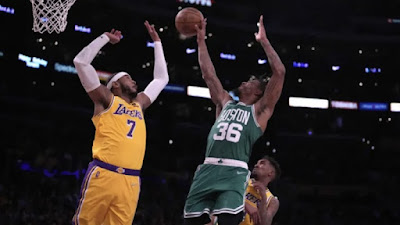 Carmelo Anthony has been linked to the Celtics as a potential free-agent signing since the team announced last week that Danilo Gallinari had suffered a torn ACL.
While it's still unknown how long it will be before Gallinari makes his C's debut this season, if at all, the idea of Anthony coming to Boston is "starting to gain traction," according to Boston Globe's Gary Washburn.

"This is starting to gain traction because Anthony may be the best shooting forward left on the market, and he has shown to be productive offensively despite his age," Washburn wrote. "Anthony has remained in great shape and can still score. He had 20 or more points in 11 games last season...[He] wants an opportunity to win a championship, and this could be his best chance."

Anthony, who turned 38-years-old this past May, averaged 13.3 points over 26 minutes per contest for the Los Angeles Lakers last season off the bench (except for three starts), while shooting 44.1% from the floor and 37.5% from 3-point range in 69 games played.
Former Celtics forward and 2008 NBA champion Brain Scalabrine, who spoke on SiriusXM's NBA Radio about possibly adding Anthony to this current C's roster, to which he's all for it if it happens.

"Jayson Tatum, Jaylen Brown, they look up to guys like that. They looked up to Joe Johnson and Brad [Stevens] thought it was really cool to bring Joe Johnson in. I think it should be the same kind of thing. Carmelo Anthony, if you watch him on Instagram, he's kind of helping his son out, he's working out younger kids -- I could see how there could be some advantages to having Carmelo on the roster, not just on the playing side, but also the mentoring side of our two stars," Scalabrine said Tuesday morning.

Gallinari was brought in to boost the Celtics' second unit scoring and though he's three years younger and three inches taller (6-foot-10) than Anthony, the former Syracuse product is definitely one of the best options left on the free-agent market and could be signed for the veteran minimum of $2.9 million.
With the Celtics already being well over the luxury tax line of $20 million as constructed, they would pay roughly an additional $13 million in taxes if Anthony is indeed signed by Boston (even if they would be only on the hook for $1.8 million of his projected $2.9 million salary) -- per NBC Sports Boston's Chris Forsberg.
Still, whether the Celtics decide to replace Gallinari with Anthony or via a trade (to shred some salary) to bring in a younger player that could make an immediate impact, the reigning East champs are still the favorites to win the 2023 NBA title -- even in a stacked conference this season -- and they need to take advantage of this opportunity to hang banner 18.
Joel Pavón
Follow @Joe1_CSP