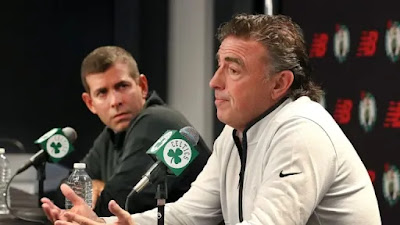 Celtics owner Wyc Grousbeck and president of basketball operations Brad Stevens held a press conference Friday morning to address the suspension of head coach Ime Udoka for the 2022-23 season.
The two representatives of the team's front office tried to explain the reason behind the unprecedent season-long suspension of Udoka, to which they described as "violations of team policies."

"A difficult time to be speaking to you all," Grousbeck began the nearly 30-minute presser. "It's a time of concern and reflection and action."

While very little details were revealed to what exactly led to the Udoka's suspension, according to multiple reports, the Celtics coach allegedly had an intimate consensual relationship with a female staff member of the organization -- which is goes against team guidelines. But due to privacy reasons, Grousbeck and Stevens didn't provide much more on what actually transpired.
On Thursday, Shams Charania of The Athletic reported that Udoka made "unwanted comments" to the female staffer after the alleged affair ended and that the Celtics first became aware of the relationship back in July.

"Some members of the Celtics organization first became aware of the relationship in July, sources said," Charania wrote. "At that time, team leadership was led to believe by both parties that the relationship was consensual. But sources said that the woman recently accused Udoka of making unwanted comments toward her -- leading the team to launch a set of internal interviews."

Based on Charania's report, an investigation that concluded earlier this week, led the Celtics to have a meeting Thursday that involved Grousbeck, Stevens and players at the Auerbach Center once a final decision was made regarding any sort of disciplinary action towards Udoka.

"The team's decision and announcement came after a closed-door meeting Thursday that involved team owners and president Brad Stevens and lasted several hours, sources said," per Charania. "Earlier Thursday, Stevens and members of the Celtics front office met with players at the team facility."

During the team's news conference, Grousbeck confirmed that the Celtics learned of a "situation" at some point during the summer to which they hired a "respected" law firm to conduct a thorough investigation. The conclusion of their findings on Thursday led to the decision to hand Udoka a year-long suspension and they're very much confident they made the right move.

"I personally feel that this is well warranted and appropriate, backed by substantial research and evidence and facts, and so I'm standing by the decision and Ime has accepted it," Grousbeck said.
"I'm not going to comment on the investigation, but we found there was enough there to take action."

With many questioning why the Celtics opted to suspend Udoka rather than fire him, Grousbeck shared his belief that a suspension was justified, at least for the time being.

"This felt right, but there's no clear guidelines for any of this," Grousbeck said. This is really conscience and gut-feeling and being here 20 years. I'm responsible for the decision, ultimately, but I took a lot of advice from partners, like Brad and others, and we collectively came to this and got there. It was not clear what to do. But it was clear something substantial needed to be done in my view -- and it was."

Grousbeck also noted that Udoka's suspension will last through June 30, 2023 (the final day of the NBA calendar) and it comes with a "very significant penalty." As far as the future of the coach, who brought the Celtics to the NBA Finals three months ago for the first time in 12 years, there's no guarantee the C's will bring him back once the suspension is scheduled to end.

"We'll make a decision at a later time about Ime's future with us and that will be discussed at another time and hasn't been decided at this point," Grousbeck said.

Despite any Celtics players having yet to comment on Udoka's suspension, Grousbeck did reflect on the conversation he and Stevens had with the roster.

"I would say, in general, they are very concerned about this," Grousbeck said. "It is not a welcomed development. They also, I felt, have energy, focus, commitment, and drive to really accomplish great hopefully things this season. That's the commitment I'm feeling about the players."

Stevens also added that he understood if any player was upset about Udoka not being with the team this season, one that many had high expectations about.

"There was a real relationship there with a lot of guys," Stevens said. "Rightfully so -- they had an incredible year last year. They had a personal connection. There's a care, both ways. Human beings are human beings, that’s going to be the way it is. To think guys on the team or coaches or anybody else in the organization can just walk back on the court and everything is fine is not the way it is.
"This is a really, really tough situation, but we're going to be forward-focused."

The Celtics will hold Media Day on Monday before they start training camp at their practice facility Tuesday.
Joel Pavón
Follow @Joe1_CSP