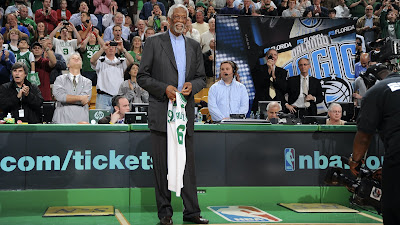 The Celtics announced Monday their plan to honor Bill Russell by having his iconic No. 6 displayed in the paint on the parquet floor at both ends of the court during the upcoming 2022-23 season.
The tribute marks the "first time numerical text will be displayed within that area on an NBA court," according to the team's press release.
Here's a preview of what the court at TD Garden will look like:

Be on the lookout for a special tribute to Bill Russell on the parquet this season ☘️ pic.twitter.com/Pt6IoZbekx


Russell, who passed away on July 31 at the age of 88, played 13 seasons for the Celtics -- winning a record 11 championships -- while also fighting for civil rights and social justice off the court.
The NBA announced in August their plans to honor Russell this season, including permanently retiring his No. 6 league-wide for the first time in the association's history.
The Celtics will also unveil their 2022-23 City Edition uniforms as a tribute to Russell -- a project they were collaborating with the icon over the years -- on opening night when they host the Philadelphia 76ers to tip-off the NBA season come Oct. 18.
Joel Pavón
Follow @Joe1_CSP