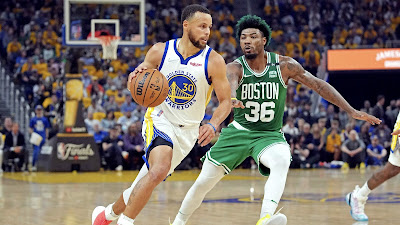 The Celtics pulled off one of the biggest midseason turnarounds in league history before making their unexpected NBA Finals run this past June.
After a 25-25 record in the first 50 games to start the 2021-22 campaign, Boston went 26-6 the rest of the regular season but ultimately fell short of an NBA title.
According to Marcus Smart, Boston were within two games of beating the Golden State Warriors due to lack of depth off the bench, thus putting too much pressure on the starters to come through late in the season and throughout the playoffs.

"I think depth was one of the big things that hurt us," Smart told The Athletic earlier this week. "You had me, Jayson [Tatum], Jaylen [Brown] and our starters playing, clawing [up the standings] and we did it to ourselves."

Boston ranked 26th in the league last season in scoring off the bench, averaging just 28.5 points per contest. Meanwhile, Jayson Tatum -- who at times looked very fatigued during the Finals and was nursing a wrist injury -- ranked fourth among NBA leaders in total minutes played during the 2021-22 regular season.
Celtics president of basketball operations Brad Stevens clearly addressed the team's second unit depth when he added veterans Malcolm Brogdon and Danilo Gallinari this summer. Despite Gallinari's ACL tear that could have him miss most if not all of the upcoming season, Smart believes the reigning Eastern Conference champs will be better prepared for the grind in 2022-23, as they look to make another NBA Finals run.

"We put ourselves in that situation early on [last season], having to fight back through injuries and stuff," Smart said. "Being able to have that depth of guys who are experienced and understand the game such as Gallo and Brogdon definitely will help us with that."

While the Celtics are not likely to sign free agent Carmelo Anthony to replace Gallinari, it appears the depth of the training camp roster will be tested immediately with such veteran invitees like Massachusetts natives Noah Vonleh and Jake Layman, who among others will have a shot to get a standard regular season contract before opening night come next month.
Joel Pavón
Follow @Joe1_CSP