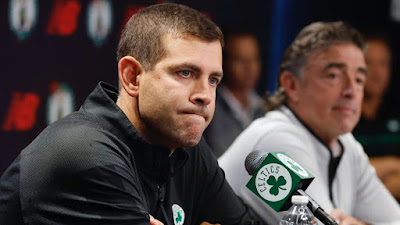 Celtics owner Wyc Grousbeck and president of basketball operations addressed the suspension of Ime Udoka for the 2022-23 season Friday morning in a press conference at the Auerbach Center.
"Obviously, it's been a hard time", Stevens said during his opening statement of the joint presser in an attempt to somewhat explain the reason(s) behind Udoka's year-long suspension, but not much was said beyond "violations of team policies."
Stevens' voice noticeably began to tremble, while visibly trying to fight back emotions when he expressed disappointment with all the "Twitter speculation" that Celtics female staffers had to go through in the wake of reports surrounding Udoka's role in an intimate and consensual relationship with a team staff member -- which led to an investigation into his workplace behavior.

"We have a lot of talented women in our organization, and I thought yesterday was really hard on them," Stevens said in Friday's news presser. "I think that nobody can control Twitter speculation, rampant bullshit, but I do think that we as an organization have a responsibility to be there and support them now, because a lot of people were dragged unfairly into that."

Grousbeck shared a similar sentiment on the matter that stemmed from the multiple reports about Udoka and the team's press release statement.

"It's unfortunate that female staff members of the Celtics have been dragged into the public eye unwillingly and inappropriately. We take a strong stand against that, and we regret it for them."

However, Grousbeck also added that Udoka's conduct doesn't speak to a potential wider Celtics or overall culture issue within the organization.

"We think our culture is very strong," Grousbeck said Friday. "We're very proud of it, but this has shaken it, maybe. I don't think there’s a wider issue than what we've spent several months uncovering and then deciding what to do about. I don't think it goes more broadly, but that's our current thinking."

Stevens also confirmed that 34-year-old Joe Mazzulla, who he hired as an assistant coach in 2019, has been named Celtics' interim coach in Udoka's absence this upcoming season.

Mazzulla comes in with no NBA experience as a head coach but was a finalist -- along with former top Celtics assistant Will Hardy -- for the Utah Jazz's head coaching gig in June and was a member of the Maine Red Claws' (now the Maine Celtics) coaching staff back in 2016.
Of course news of Mazulla's prior arrests (alcohol related) during his time at West Virginia (where he played on the basketball team from 2006-11) have resurfaced, to which Stevens believes has made the now current Celtics' interim head coach a person of substance and has really grown since his college days.

"When we were considering hiring him as an assistant, I vetted that and the incidents when he was in college really thoroughly," Stevens said. "I'll tell you this: I believe in Joe's substance as a person. I believe strongly. He's been very open with me about how those moments have impacted him in every which way. You can see it in the way he carries himself.

When asked if he had considered going back to the bench even on an interim basis and after eight successful season as a head coach of the Celtics, Stevens says he didn't think of returning to coaching.

"Joe's the best choice to do that -- by a long shot," Stevens said.

Still, Grousbeck albeit "a brief" conversation, clearly wouldn't mind if Stevens did want to take the reigns again, but even if the Celtics -- who have championship aspirations this season -- don't exceed or match expectations, don't count on Stevens to pick up that clip board to start drawing up plays again.

Absolutely not," Stevens said. "There's a lot of factors in play, I wouldn't necessarily even want to do that."

With Udoka's future with the Celtics up in the air for the time being and training camp set to begin next Tuesday following Media Day on Monday, Mazzulla has his work cut out for him in a season that had so much promise after a trip to the NBA Finals just three months ago.

"I am concerned about the situation and its impact on everybody in the Celtics' organization, and I do hope this represents the beginning of a new chapter and a chance to turn the page and move forward with things, to some extent, resolved," Grousbeck said. "And I am personally very confident in the people we have here, starting with my partner in basketball, Brad Stevens, and the staff and the roster and the training staff and the front office and the business office of the Celtics. We're going to stand together as a family as we move forward."

Stevens did seem opened to the idea of hiring one more coach, despite thinking "the staff checks a lot of boxes as is. There may be an addition."
Joel Pavón
Follow @Joe1_CSP