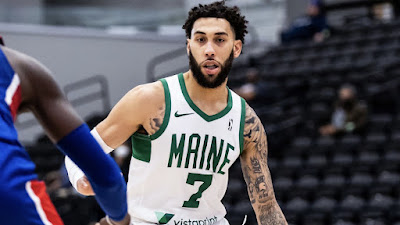 The Celtics have reportedly signed Denzel Valentine to an Exhibit 10 training camp deal, according to Shams Charania of The Athletic.
A six-year NBA veteran, Valentine will compete for a regular season roster spot after joining Boston's G League affiliate the Maine Celtics at the end of the 2021-22 campaign -- where in 31.9 minutes per contest he averaged 14.6 points on 44% shooting from the field, 35.2% from 3-point territory, 10.3 rebounds and 7.0 assists in 12 games played.
Valentine also spent part of last season with the Cleveland Cavaliers before being traded to the New York Knicks in January. The 6-foot-5 wing then joined the Utah Jazz on a 10-day contract and followed that with a stint in Maine.
The No. 14 overall pick in the 2016 NBA Draft, Valentine spent the first five years in the pros with the Chicago Bulls, including the 2018-19 season where he sat out with an ankle injury. In 256 career NBA games (45 starts), Valentine has averages of 7.0 points, 3.4 rebounds and 1.8 assists, while shooting 39.4% from the field and 36% from behind the arc.
The Celtics currently have 10 players on guaranteed contracts and their two Two-Way spots filled. NBA teams must have at least 14 players on standard deals, which could mean at least two players out of Valentine, Bruno Caboclo, Noah Vonleh and the rumored return of Brodric Thomas or any other future signings, may make the regular season roster.
With training camp starting up next month, the Celtics still have two more open roster spots, as NBA teams can carry a maximum of 20 players into camp and the preseason. However, teams must trim down to 15-players max on standard contracts and two Two-Way deals prior to opening night of the regular season.
Joel Pavón
Follow @Joe1_CSP