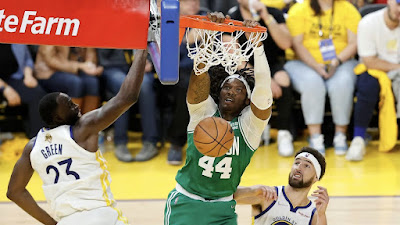 Celtics center Robert Williams III will reportedly undergo an arthroscopic procedure on his left knee this Thursday and is expected to miss 4-6 weeks, according to ESPN's Adrian Wojnarowski.
The surgery comes six months after Williams had a torn meniscus repaired in the same left knee just prior to the Celtics run to the NBA Finals, causing the big man to miss seven games during the playoffs this past spring.

Boston Celtics center Robert Williams is undergoing arthroscopic procedure on his left knee and is expected to need 4-to-6 weeks for recovery, sources tell ESPN. Williams had meniscus surgery in March and played through the playoffs


The latest procedure is being described as a "cleanup" or a "scoop" of the left knee which means Williams would be sidelined throughout training camp, preseason and most likely the first couple of weeks of the regular season.
Williams, who turns 25 next month, was "experiencing discomfort" in his left knee while he "ramped up activity" ahead of next week's start to training camp, prompting the decision to get surgery now, per The Athletic's Jared Weiss.
Coming off his best season averaging 10.0 points, 9.6 rebounds and 2.2 blocks (second in the league), Williams was also named NBA All-Defensive Second Team (first overall selection of his career), while being the anchor for a Celtics roster that led the league in defensive efficiency during the 2021-22 campaign.
Celtics Media Day is scheduled for September 26, with their first preseason game being on October 2 against the Charlotte Hornets at TD Garden, before hosting the Philadelphia 76ers Opening Night come October 17.
Joel Pavón
Follow @Joe1_CSP