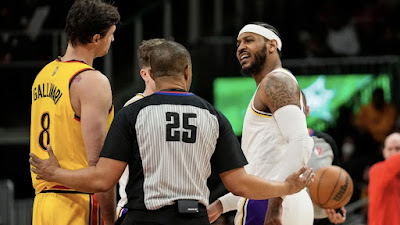 The Celtics may have a decision to make following Friday's news that Danilo Gallinari has a torn ACL for the second time in his career after initial reports indicated it was only a meniscus tear.
While the timetable for a return went from "at least two months" to now anywhere up to a year, Gallinari along with Malcolm Brogdon were supposed to add depth to the Celtics' second unit, as they look to make another run to the NBA Finals this season.
Nevertheless, since Gallinari's knee injury, rumors of future Hall of Fame forward Carmelo Anthony being "considered a potential signee" by the Celtics was reported by Bally Sports' Brandon "Scoop B" Robinson earlier this week.
According to Robinson, the New York Knicks have also shown interest in the veteran free agent, who's coming off averages of 13.3 points on 37.5% from 3-point range and 4.2 rebounds in 69 games played for the Lakers -- his lone season in Los Angeles.
At age 38, Anthony's role would be similar to what Gallinari was brought in to do, which was simply provide instant offense off the bench for the Celtics and he wouldn't cost much to acquire either.
Despite Boston losing some size with Anthony (6-foot-7), who's roughly three inches shorter than Gallinari (6-foot-10), Melo can still score at a high clip, plus neither forwards have exactly been defensive juggernauts throughout their respective careers, so head coach Ime Udoka wouldn't be losing much on that end.
With the Celtics being so sound defensively, it shouldn't be difficult to get Anthony to buy into Udoka's schemes, giving him a real shot to win a championship that's been missing from an otherwise impressive resume.
Assuming Anthony isn't seeking a bigger role and or salary, the Celtics could be his best opportunity to win before possibly riding into the sunset.
Joel Pavón
Follow @Joe1_CSP