Why Celtics players were shocked, confused by Ime Udoka's suspension 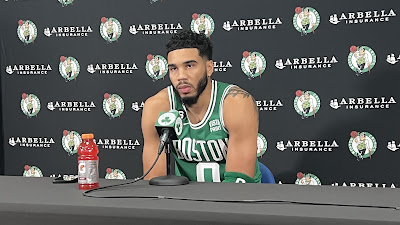 Jayson Tatum went through his sixth Media Day as a member of the Celtics on Monday, what he wasn't expecting in the days leading up to it was a franchise altering decision effective immediately.
The All-Star forward, along with his teammates were surprised to learn the fate of their head coach Ime Udoka and his season-long suspension.
According to Tatum, he -- along with everyone else -- found out of the situation via Twitter and and not through the Celtics.

"It's just an unfortunate situation," Tatum said Monday. "All things considered, nobody expected this coming into the season. We were all caught off-guard by everything. But we've got to try to move forward and play basketball."

Every Celtics player who spoke claim to have little to no information regarding Udoka's violations of team policies. Tatum did note however, there's probably valid reasons behind not having all the details for the time being.

"Apparently it's a lot of things you can't speak about," Tatum said. "So I think I'm kind of in the same boat. I don't know. It's hard for me to answer if things were handled the right way or if were they weren't. Because, you know, for a lot of reasons I don't know a lot of details. I just don't know."

Jaylen Brown, just like Tatum haven't been in contact with Udoka since the news broke of the suspension. Brown echoed the same sentiment that the roster doesn't know much, leaving them confused and most likely a bit frustrated over the questions being asked.

"There's not a lot of information that's being shared with me personally or anybody else for that matter," Brown said during his media conference, when asked if the lack of information made it difficult to support the team. "You can't really make a comment on it without having all that information. I think that does make it difficult, to answer your question."

With rumors running rampant on what exactly took place between Udoka and a reported female Celtics staffer having an improper relationship, Brown took it a step further and reiterated that it's tough to comment on something without having all the facts beforehand.

"I'll say it again: I wish we had more details," Brown said. "From what we know, it's hard to make a decision based upon whether it's consensual or not in the workplace or whatever’s going on -- which we've known that's happened before in the workplace -- but I guess there's more to it than possibly which I don't know.

Marcus Smart said he meet with Udoka in Los Angeles when the coach came to visit him and other teammates over the summer, probably around the time of the supposed investigation the Celtics launched, but none of the players were aware of any type of ongoing situation.

"It's been hell for us," Smart said during his media presser. "Caught by surprise. Nobody really knows anything so we're just in the wind like everybody else, so these last couple of days have been confusing."

Still, Smart did say he was "definitely" comfortable with how the Celtics handled the matter even if the players were not filled in on any information prior to Media Day.

While the players did met with Celtics owner Wyc Grousbeck and president of basketball operations Brad Stevens some time on Thursday in search of some answers and while all were shocked of Udoka's suspension, Smart revealed that they didn't ask a lot of questions because they "didn't know what questions to ask."
In the meantime, Smart, Brown and Tatum, plus others on the roster, were quick to rally behind and show support to their new interim head coach Joe Mazzulla, who they are "familiar with" as the Celtics longest tenured assistant since 2019.

"[He's] somebody we're comfortable with," Tatum said. "He's been here the last three or four years, so same person, just in a different position now. So somebody that we're familiar with and have a lot of respect for."

The Celtics tip-off their preseason October 2 when they host the Charlotte Hornets at TD Garden.
Joel Pavón
Follow @Joe1_CSP