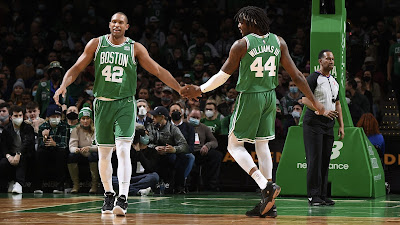 With the 2022-23 NBA season just around the corner, expectations have been set at an all-time high for the Celtics for the upcoming campaign.
While the core and starting-five of Jayson Tatum, Jaylen Brown, Marcus Smart, Al Horford and Robert Williams remains intact, plus, the addition of Malcolm Brogdon, the Celtics are in a great position to make another run to the NBA Finals and raise banner 18 to the rafters.
Despite there being some skepticism due to the C's early hiccups such as offseason acquisition Danilo Gallinari suffering a torn ACL last month that may lead to sitting out the entire regular season and Robert Williams reportedly having a procedure done on his left knee this week that could sideline him for one-and-a-half months, there's also still reasons to be optimistic about this roster.
Count Sports Illustrated's Chris Mannix as one who is unfazed by the setbacks, as he believes the Celtics will be a juggernaut once again in 2022-23.

"I am wildly bullish on this team," Mannix said Tuesday during an appearance on NBC Sports Boston's Early Edition. "I've spent the last couple of weeks talking to members of the team for a story we're working on at Sports Illustrated, and everything I hear from people around the players and the players themselves, it is really, really good things. Things that you want to hear.
"I was talking to Drew Hanlen, who's the trainer for Jayson Tatum. He said all summer long, Tatum's attitude has shifted entirely to just being focused on winning. Talking to Al Horford, he was telling me he's not just thinking about playing this year, his body feels so good he feels he can play two or three more years and keep his career going close to the age of 40.
"Even Robert Williams, before this latest injury issue, he was telling me these guys have been talking all summer about maintaining their edge, about getting off to a good start this season and picking up right where they left off. I think this team has the talent, I think this team has the depth."

Mannix points out that the Celtics are already displaying team chemistry well ahead of next week's training camp, as the new-look roster has been seen working out at the team's practice facility recently.

"If there's one concern, it's will these guys be willing to sacrifice? Malcolm Brogdon comes in, will he be willing to sacrifice? Well, I talked to Horford, and Horford worked out with Brogdon this summer," Mannix said. "He said the one thing Brogdon kept saying to him was, 'What can I do to fit in? What can I do to help us win?' So right now, all the signs are positive for this Celtics team."

Boston kicks-off their preseason schedule October 2 when they host the Charlotte Hornets, before they take on the Philadelphia 76ers Opening Night October 17 at TD Garden.
Joel Pavón
Follow @Joe1_CSP