Wyc Grousbeck on 2022-23 Celtics: 'We're not a hands-down team to repeat as Eastern Conference champions' 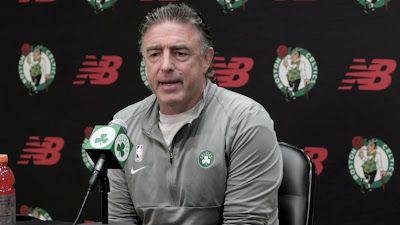 Celtics co-owner Wyc Grousbeck surprisingly doesn't think his team reaching the NBA Finals last season was all that impressive as many would think after falling two wins shy of a title.
In a recent interview with Adam Himmelsbach of The Boston Globe, Grousbeck points out that despite the mid-season turnaround and many obstacles the Celtics went through, they still came up short of their ultimate goal.

"I loved being right there with them. It was thrilling. The other side of the coin is I think that we've now been overrated," Grousbeck told Himmelsbach. "I think that performance was a bit overrated in the public mind, or my own mind, because I'm the one saying it. [We were] a finalist and two wins away from winning it, but when you look back, Brooklyn was a tough series, and then we had to go seven games [against the Bucks and Heat]. Then we lost [to Golden State]. So, we're not a hands-down team to repeat as Eastern Conference champions. I think we're a quality team."

Following a very busy offseason of adding depth such as the acquisition of Malcolm Brogdon to the help All-Stars Jayson Tatum and Jaylen Brown with some of the scoring load, Grousbeck views the Celtics as one of "probably five or six teams" contending for a championship this upcoming 2022-23 campaign, but says he's also "cautious against being overconfident" in the process.

"I am [trying to tamp down expectations], but I'm not trying to do that in some manipulative way. It's how I feel," Grousbeck said. "Look, I wouldn't pick anybody ahead of us. But I don't think we've got any smooth sailing ahead. We were a good team last year that won some key close games and were in the mix. But I don't have us as the favorites. There are five or six co-favorites, as far as I'm concerned."

With the Celtics already committed to nearly $173 million in total salary of 12 standard contracts, they are currently sitting at $20 million over the luxury tax which would amount to roughly a $220 million roster so far.
According to Grousbeck, Celtics president of basketball operations Brad Stevens has the green light to continue spending as needed to build a contender to not only return to the Finals but win it all, suggesting that a willingness to splurge for the first time since the disastrous 2018-19 roster and of course during the most recent Big-3 era (2008-2013) even more of a necessity at this point.

"I think we're spending about $200 million on the roster this year, and Brad has the green light to spend more," Grousbeck told the Globe. "People can write or think whatever they want. Or, you can actually look at what we do, which is do whatever we possibly can to win a championship. And we're in the mode right now of completely adding on. Are you going to trade future draft picks and young players under 30? Hopefully not. But money is not a consideration whatsoever, and this roster shows that."

The reigning champion Golden State Warriors had a $170.3 million luxury tax bill in 2021-22, giving them a total of $346.2 million payroll for their title-winning roster.
Meanwhile, the Celtics have plenty of exceptions that can be used to add even more talent which include the Juancho Hernangomez traded player exception at $6.9 million and the Dennis Schroder traded player exception at $5.9 million (both set to expire in February). And if Boston wanted to go even deeper into the luxury tax threshold, they could also soon be in possession of a $3.2 million disabled player exception with offseason addition Danilo Gallinari likely out for at least 6-12 months with an ACL tear.
That DPE is even more than any other contender could spend despite it costing potentially upwards of $12 million in the end for the Celtics depending on total salary, but either way, Grousbeck is ready to hang banner 18 and it appears that it may be literally at all costs.
Joel Pavón
Follow @Joe1_CSP