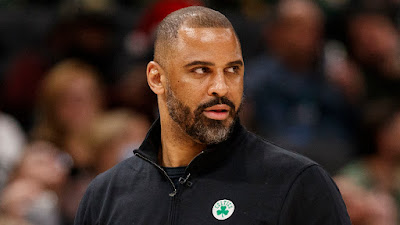 Celtics head coach Ime Udoka is facing a suspension for the entire 2022-23 season for his role in consensual relationship with a female staff member, according to The Athletic's Shams Charania.
That alleged relationship is considered a violation of the team's guidelines and a formal announcement is expected as soon as today, per ESPN's Adrian Wojnarowski -- who reported the story late Wednesday night of possible disciplinary action.
Boston Assistant coach Joe Mazzulla -- was hired by Danny Ainge three years ago -- is most likely to become the teams interim coach for the season in place of Udoka, according to sources.


Udoka's top assistant, Will Hardy, departed the Celtics in June to become the head coach of the Utah Jazz following the loss in the NBA Finals to the Golden State Warriors.
After spending time as an assistant with the San Antonio Spurs, Philadelphia 76ers and the Brooklyn Nets, Udoka led the Celtics to an Eastern Conference championship (their first since 2010) during his first season in Boston and finished fourth in voting for Coach of The Year.
Udoka oversaw one of the biggest midseason turnarounds, as the Celtics finished the 2021-22 campaign with a 28-7 record in the final 35 games following the team being 25-25 in their first 50, that led to an impressive run past the Brooklyn Nets, Milwaukee Bucks and Miami Heat in the postseason and into the Finals (fifth rookie head coach to make it to the Finals in their first season), coming up just two wins shy of the franchise's 18th title.
The Celtics are scheduled to hold Media Day Monday before the start of training camp at the Auerbach Center on Tuesday.
Joel Pavón
Follow @Joe1_CSP