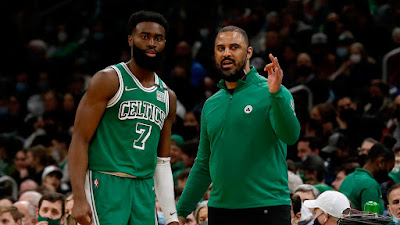 The Kevin Durant trade saga has finally ended and no one is probably happier than Ime Udoka.
Despite reports that Boston made a rumored trade offer involving Jaylen Brown, the Celtics head coach -- who spoke on Tuesday afternoon -- made sure to reach out to all his players on the current roster to keep them in the loop during all the madness.

"We have a lot of guys whose names have come up over the years," Udoka said on WEEI's Merloni, Fauria & Mego. "With us, we reiterate how important they are to us and we all see these guys in the summer anyway but also let them know that a lot of these rumors that come up are leaked by people with specific agendas."

While rumors of this magnitude can create distractions, especially for a team like the Celtics -- who have added veteran pieces in hopes of making another NBA Finals run -- Udoka wanted to be transparent to his players, including young stars Brown and Jayson Tatum, which tends to come with the territory of being on a contending roster and it also means that it's likely not the last time they'll see their names mentioned in future reports.

"If a name like Kevin Durant comes up, a high-level player like that, people are naturally going to ask about your best players," Udoka said. "Jayson [Tatum], Jaylen, Marcus [Smart], those names always tend to come up. We let them know how much we value them and these things are often leaked and nothing is going to come of it."

Celtics president of basketball operations Brad Stevens made similar comments on the same Boston radio station and program just prior to Udoka's appearance, stating that there were clear lines of communication with Brown and all parties involved.
With the Durant-to-Boston talk seemingly put to rest, the Celtics can move forward with their current roster they have built this offseason -- adding veterans Malcolm Brogdon and Danilo Gallinari -- to focus on bringing home an 18th championship banner.
The Celtics will begin training camp next month, before they tip-off the 2022-23 season on Oct. 17, when they host their division rival Philadelphia 76ers.
Joel Pavón
Follow @Joe1_CSP