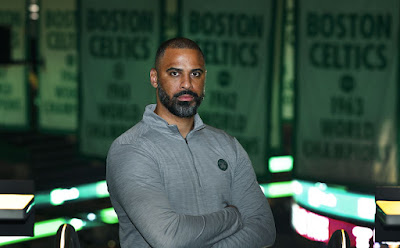 The Celtics can finally turn their focus on not only returning to the NBA Finals this season, but winning banner 18 following rumors of a possible Kevin Durant trade being put to rest.
Coming off one of the biggest midseason turnaround in recent league history that began with a 25-25 record and ended with a loss in six games to the Golden State Warriors this past June, Boston's head coach Ime Udoka believes that his team has to enter the 2022-23 campaign with a different mindset.

"We're being hunted now," Udoka said during an appearance on WEEI this week. "That's the message to the guys: Last year, we were the hungry, younger team that had to try to achieve some things and we've gotten to that level. But know we have to take another step and teams are going to be coming after us with a target on our back.

"No time to get out to a slow start. [The coaching staff will] be more comfortable with the group and vice versa and so we're ready to get after it again."

The Celtics used the last three months of the 2021-22 season to finish with a 51-31 record as the second seed in the East before making their run to the Finals, exhausting a lot of energy in the process while some were also battling injuries throughout the playoffs like Jayson Tatum and they simply just ran out of gas in the end.
This time around the Celtics look to not have to climb out of another hole during the upcoming season in order to make it back to the Finals, which Udoka thinks his players are ready to take on the challenge.

"I think you have some extra motivation there, just losing in the Finals, getting to that stage and then not finishing the deal," said Udoka. "We all still have a sour taste in our mouth about it. Everywhere you go, people say congrats on the season but you didn't get it done. And so that should motivate everybody alone."

Udoka also noted he was in Los Angeles recently catching up with Tatum, Jaylen Brown and Marcus Smart, as the Celtics have the best odds and are the favorites to win the NBA title this season.

"You look at Jayson, Jaylen, Rob, these guys that have been around for everything but they're still a very young age. And then you've got a guy like Grant Williams and Payton Pritchard and Derrick [White] who was added to our team midseason, those guys kind of being with us last year and having that big role only helps us going forward. The additions [of Malcolm Brogdon and Danilo Gallinari] are great, I think we're better for that.
"But also, as I've mentioned quite a few times, us going back and forth with the players knowing us and us knowing them, we'll all be better for it going forward.
"So that's the plan: to get back and finish the deal this time."

The Celtics begin training camp next month and tip-off the NBA season on Oct. 17 when they host the Philadelphia 76ers.
Joel Pavón
Follow @Joe1_CSP