Brian Windhorst: Jayson Tatum will 'most likely' get max contract from Celtics this offseason 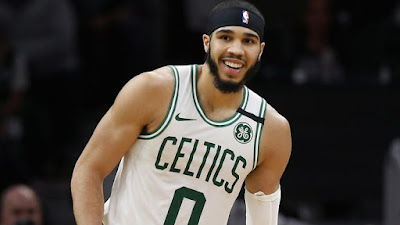 Forward Jayson Tatum is eligible for a rookie extension this offseason and the Celtics are expected to offer a max-contract to their All-Star.

According to ESPN's Brian Windhorst, Danny Ainge will "most likely" make a max deal offer to Tatum:


"If Jayson Tatum is the superstar that they envisioned when they began this whole rebuilding process when they traded Kevin Garnett and Paul Pierce for all of those draft picks hoping to land a player like this, we could see 'Glory Days' for the Celtics again. But it's very much up in the air, and I'm gonna tell ya, they're gonna have to pay him like it because after this season ends, he is going to get most likely a max contract. They're going to bet that he becomes that player."

The Celtics continue to commit to their homegrown talent, as Marcus Smart was awarded a four-year, $52 million contract in the summer of 2018 and Jaylen Brown received a four-year, $115 million deal prior to the rookie-scale extension deadline last October.

Tatum is set to earn $9.9 million next season in the last year of his rookie deal and an extension wouldn't come into play towards the salary cap for the Celtics until the 2021-22 season.

While the COVID-19 pandemic plays a factor for Tatum and Adam Silver has yet to reveal a plan for a restart of the NBA season, there's still uncertainty around the league's salary cap.

Marc Berman of the New York Post, reported that the 2020-21 salary cap will "for sure" be lowered. Max extension are based on 25-percent of  a team's salary cap, which could increase based on incentives such as making an All-NBA team or winning league MVP.

Tatum has blossomed into one of the Celtics' promising rising stars, as he is currently averaging 23.6 points, 7.1 rebounds, while shooting 44.8 percent from the floor (39.8 from behind the arc) per-game. The 22-year old was also named an All-Star for the first time this season.