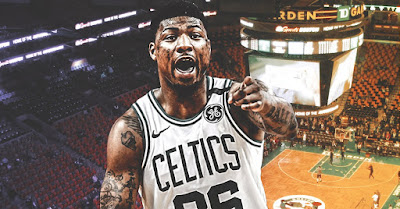 While Marcus Smart announced last week that he had tested positive for COVID-19, the rest of his teammates and coaches have reportedly tested negative.

Despite conflicting reports from ESPN nearly ten days ago that the Celtics had all tested negative for the coronavirus, an anonymous team source confirmed on Monday night that Smart was the only member of the organization to test positive, while all players and staff tests came back negative and free of any symptoms.


According to Mark Murphy of the Boston Herald, the Celtics have remained in self-quarantine since they received their tests on March 15th. Smart, who was shocked about his positive test results, says he's remained in quarantine since he returned from Milwaukee with the team.


"For me, it was like a surprise," Smart told Chris Cuomo on CNN Friday night. "I feel fine. I don't have any symptoms, haven't had any symptoms. For me when they told me I had it I was like, oh, wow. It definitely really makes you alert to what's going on."

The Celtics played the Indiana Pacers on Tuesday March 10 and were scheduled to face the Bucks on Thursday March 12, before Rudy Gobert tested positive for COVID-19 on Wednesday March 11, forcing the NBA to suspend its games.

Though Smart, like Donovan Mitchell was asymptomatic at the time of his test, so far he's using his situation to further educate during this worldwide pandemic. Even Smart's high school coach and director of his youth camps, Kenny Boren believes Smart will be just fine.


"It's Marcus, so he's pretty even-keeled," said coach Boren to Mark Murphy. "His highs aren't too high and his lows aren't too low, so he's just going about his business at home, playing video games, video chatting with friends. The great thing he did, and the rest of the Celtics who were on that road trip, is that they landed and self-quarantined right away. That was a very smart move." [Boston Herald]

Though the NBA, along with MLB, NHL and MLS have postponed their season for at least 30 days, there is still no clear indication when games will resume play again.