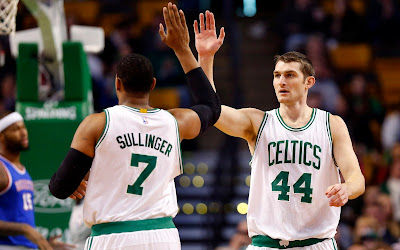 Despite all the recent Kevin Durant and Dwight Howard talks this past week, everyone in Boston had forgotten about two of the C's own free agents until Wednesday.

According to sources, the Celtics announced it will extend qualifying offers to Jared Sullinger and Tyler Zeller, making them restricted free agents [instead of unrestricted] ahead of Thursday's NBA deadline. The team will have the right to match any offer sheet the two big men sign.

Both offers are very affordable and well within the Celtics cap for next season, however with Danny Ainge looking for upgrades down low, Sullinger and Zeller could end up being plan B if they don't find long term deals elsewhere [if the C's don't match it] or if Ainge can't sign any other low post free agents for whatever reason.

Then again Sullinger could take the one-year qualifying offer and test the market next summer when he would be an unrestricted free agent. Zeller, on the other hand, could be looking for a bigger role on a playoff team and a multi-year deal.

The Celtics have been busy trying to improve their roster while maintaining the flexibility of their salary cap and making room for a potential signing of two-'max' contract free agents.

Ainge also has until July 3 to pick up team options on forwards Amir Johnson and Jonas Jerebko or both could be waived. With the Celtics meeting with Durant set to take place on Saturday July 1 [first day teams can negotiate with free agents], it's still unclear what the decision will be.

Johnson [7.3 points, 6.4 rebounds in 79 games] is due $12 million next season while Jerebko [4.4 points, 4.1 rebounds in 78 games] is due to earn $ 5 million. Both could be claimed off of waivers if their options are not picked up and the Celtics would get nothing in return if they let the duo walk.

Amir Johnson was the team's best rim protector [1.1 blocks per game] and Jonas Jerebko was one the C's best shooters from behind the arc [39.8 percent] also becoming a starter in the postseason against Atlanta.

Hopefully the decision will become an easier one to make after the first 24-hours of free agency when the Celtics will have a better idea of where they stand in the Durant-saga.

The way I see it and how things are going, the former MVP is already impacting this C's roster in one way or another.