Celtics Wyc Grousbeck on trade talks for No. 3 pick: 'We weren't even close' 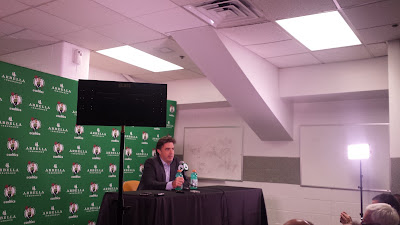 After the Celtics chose Jaylen Brown at No. 3, co-owner Wyc Grousbeck heard the boos from Celtics fans at TD Garden's draft party rain through the hall and into the locker room -- where the team's brass were seated.

While some fans may have been disappointed in who the Celtics selected at No. 3, most Celtics fans were upset at the fact that the reports they heard regarding the pick being dealt to either the Bulls or the 76ers never went through.

However, Grousbeck disagrees with that notion and insists that the trade talks for the pick came nowhere close to being completed.


"We weren't even close to any of the offers that came in today, Grousbeck said. "If it were close, we might have stretched. We didn't feel anything was close."

According to reports, the Celtics were in talks with the 76ers for Nerlens Noel and talked to the Bulls about making a deal for All-Star Jimmy Butler.


"Adding a veteran was certainly a consideration as we went into this draft day," Grousbeck said. "Adding a veteran for the third pick was a consideration. We were willing to have those discussions, just nothing even came close. If it had come close and we hadn't quite gotten there, I'd tell you that. It just wasn't even close. It's actually an easy day when nothing's close. I don't look for easy days -- you try to make the right directions -- but this was an easy day."

Grousbeck went on to talks about how excited the Celtics are to select Brown, and added that the Celtics liked his game since day one.


Click the video below to watch Grousbeck's entire press conference.