Celtics Summer Madness - Vote in Round Two of The "Thank you, Brooklyn" Bracket 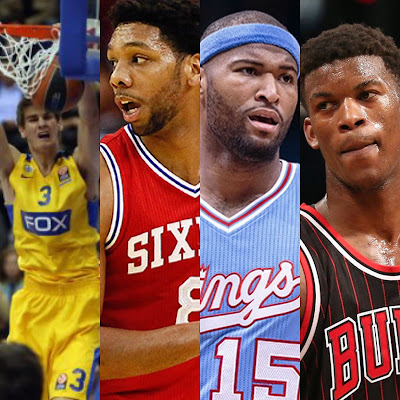 The draft is only a week away and the buzz surrounding the Celtics #3 Overall Pick is deafening. We decided to gauge the voice of the fan with our Celtics Summer Madness Tournament, where round one was eye opening. Favorites dominated the first round of The "Thank you, Brooklyn" Bracket, except there was one HUGE upset.

SCROLL DOWN TO VOTE IN ROUND TWO!

First Round Recap of The "Thank you, Brooklyn Bracket" in the Celtics Summer Madness

Hield's 85 out of 100 3-point display he put on for Celtics brass came a day after the voting closed... I wonder how it would have changed the outcome. However, everyone wants Jimmy Butler, the question is what else would you have to give up to get him? It's obvious though, Celtics fans are all in to acquire Butler.

Cousins is a beast and established. Murray has potential to be great. However, no surprise here Cousins has been dangled in front of the Celtics for years... everyone still want's it to happen.

WOW! I am shocked by this result. Yes, I know Kevin Love is having a bad NBA Finals. Sure, his production has dipped significantly over the past two years while trying to fit into a system that wont work for him. I also understand that people think he is soft and wont be a fit for the Celtics. BUT COME ONE DRAGAN BENDER!!! Does anyone actually know who is softer, Love or Bender? I know this is supposed to be the voice of the Celtics fans but JEEEESSSSSUUUUS.... now I get why Trump got the nomination.

Okafor crushed his teammate here. Age, offensive skills, and fighting ability in the streets of Boston probably all weighed into this result.


Round 2 of Causeway Street's The "Thank you, Brooklyn" Bracket

Great matchup here. Do you want Danny Ainge to cash in his assests for a perenial all star in Jimmy Butler? Or, would you rather go after a young, developing true 7-footer that showed a very nice low post game last year? Click on the player's photo to cast your VOTE Here!!

Is it time for Danny Ainge to finally make the "Godfather Offer" for Cousins? Or, would you rather go after the potential of the next Porzingis? Click on the player's photo to cast your VOTE Here!!