Celtics Draft 2016 - Is the Brooklyn Trade Slowly Turning Into A Failure? 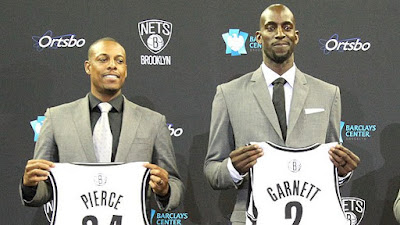 The overwhelming feeling that the Kevin Garnett and Paul Pierce trade is going to go down in history as a failure is starting to take over my brain.

If Danny Ainge can't package Brooklyn's 3rd Overall pick in tonight's NBA Draft to acquire an All-Star, the return for the best two players in recent Celtics history will be halfway gone. If Ainge does keep the pick, all the Celtics will have to show for the first half of their major haul from Brooklyn is James Young, and the third best player in a two player draft.

That is depressing as hell.

We can all sit here and say that Jamal Murray, Kris Dunn, Buddy Hield, Dragan Bender, Jaylen Brown or who ever the Celtics will eventually draft at the 3rd pick is going to be the steal of the draft and a franchise changing player. However the fact is, we are all just lying to ourselves. We are all staring into the mirror saying the diet will start tomorrow, as we crush two pints of Ben and Jerry's Half Baked Ice Cream. Secretly, every Cetlics' fan knows that if we can't move this pick then Ainge moved on from KG and Pierce for assets, that so far have never come to fruition.


You may counter to say that the Cetlics still have two more Brooklyn picks. Do you really think that will get it done for a superstar? If Ainge can't package his trove of picks, including the #3 pick in tonight's draft, what makes you think that a pick swap next year and a 2018 lottery pick will be any better? This whole KG/Pierce trade comes down to ping pong balls if you can't trade these picks now.

I will say this, the trade was always going to be back loaded. The Celtics knew Brooklyn was going to be in cap jail, they had aging stars and were probably going to suck, so I get why the trade happened. I'm just saying the Nets did suck last year, the Celtics as always caught no luck in the lottery, and now they must move that pick.

Ainge has to trade for an All-Star Caliber player, or at least a young stud that has proven himself on the NBA level. The rumors have been there. Basically every player that may or may not be available has been rumored to be targeted by Danny Ainge and the Celtics. Jimmy Butler, DeMarcus Cousins, Gordon Hayward, Blake Griffin, Jahlil Okafor, Nerlens Noel, Khris Middleton, Jabari Parker, Carmelo Anthony, and Kevin Love create a list of All-Star Caliber players that Ainge has yet to be able to trade for. 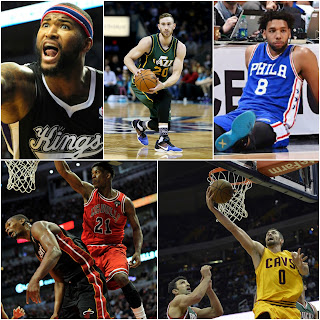 If those players are truly available, then how hasn't Ainge gotten it done? There are rumors that teams don't want to trade with the Celtics because they see all the trades in the past have been beneficial to the Celtics, to a certain extent.

It could be that the Celtics and Danny Ainge have too many assets and that is never a good thing when you come to the bargaining table. Not only do all the other GM's in the league know the treasure trove of picks that the Celtics have, but they also know how cheap Danny Ainge is.

I can imagine that there is a certain price for a player around the league, but if you're dealing with the Celtics it's different. The opposing GM would be dumb not to hold Ainge over the barrel and say I want three first rounders instead of two. They know Ainge has it and they know he can't use all of those picks. Ainge is like poor George Costanza with the Soup Nazi. Everyone is getting the free bread, but he is getting charged $2 extra for bread. Then, guess what... NO JIMMY BUTLER FOR YOU!


This was the gamble we all knew was somewhat risky when Ainge traded Garnett and Pierce. It was a rebuilding effort that no one really wanted to go through, but at the time was deemed necessary. Obviously, you can't hate on the haul that Danny Ainge got back in the trade, it's just disappointing what he has been able to do with it to this point.

The draft picks sound great in theory but since Ainge has made that trade, he flooded the market with trade-able lottery picks and has actually diminished what the market value is.  My fear is the Brooklyn picks may have turned into the Beanie Babies of the NBA...

Tonight will mark the halfway point of the Brooklyn trade, and every Celtics fan should be demanding a trade as opposed to drafting at the 3rd spot. Ainge has proven he can flip assets and make a winning trade, but he has struck out so far with these precious Brooklyn picks. My hope is by the time you're reading this, he may have even swung a deal for a star, and if that is the case, please watch the Seinfeld clip and go about your day.

If not, well Ben and Jerry's is on sale at Stop & Shop.