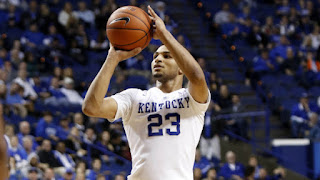 
After making Celtics pre-draft workout history in Waltham this week -- it's safe to say that Jamal Murray's confidence is through the roof.


Murray, who's considered a shooter with some 3-point range, wowed his critics when he knocked down 79 of 100 shots from behind the arc at the Celtics practice facility in Waltham -- setting a new record for most 3-pointers made at a Celtics draft workout.

As a 6'4 combo guard, Murray has an NBA-ready jump shot and can also use his athleticism to attack the lane. He's projected be selected anywhere between 3-7 in this year's draft but if you ask him the question of who is the best player in his draft class, he'll tell you it's him.


"Yeah, I think so," Murray proclaimed. "That's not a knock on anybody, I'm just looking on the work I've put in, how far I've come, how quickly I learn, how quickly I adapt to my surroundings and how easy I fit into a team. I believe I'm the best player in the draft, but every team needs what they need. I just want to go to the right team. The team that wants me. The team that believes in my potential and [couldn't make out] I have right now. Someone who is going to use down the stretch and have faith in me."

Murray is certainly the most versatile scorer. No question about that, but there's some doubt that he may never evolve into a good defender. Murray admitted it is a facet of his game that he received advice on during his workout.


"Some defensive tips, positioning. Some friendly reminders and small tips on screens or reading traps," Murray said. "Just kind of a little bit of everything. I got used to all the drills and had a lot of fun."

However, the Kentucky product continued to plead his case on how great of a scorer he is and says he plays with the mentality of a point guard but has the body of a swing guard.


"I have the mind of a 1 in a 2 guard's body," Murray said. "I believe I can score on anybody. In college, I got better at playing the 2, kind of got a feel for it coming off screens, found my rhythm. Before that I was a natural point guard. I'm a big guard, whether a 1 or 2."

Murray averaged 20 points, 5.2 rebounds and shot 45 percent from the floor at Kentucky.