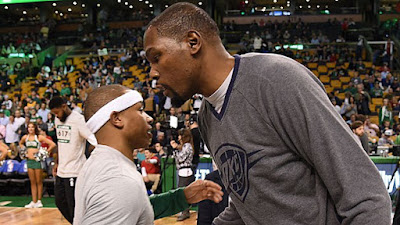 Last week Celtics All-Star point guard Isaiah Thomas sent out a not so under the radar tweet  moments after the Oklahoma City Thunder were eliminated by the the Golden State Warriors in Game 7 of the Western Conference Finals. It was clear that the recruitment process of Kevin Durant to Boston had gone underway.

Celtics fans and apparently C's players couldn't seem more happy to see the Thunder blow a 3-1 series lead, and now Durant will have to watch the NBA Finals from home, that for the time being is still Oklahoma City.

"I definitely want to give him some time," Thomas said. " I know that was a tough series and a long season for him. I wouldn't want anyone calling me up about the biggest decision of my life right after the season's over. So I'll probably give him some time and casually talk to him and then go all-in." [Boston Globe]

Thomas has been no stranger to being an active offseason 'recruiter' and now that Durant has a huge decision to make come next month, it's going to take a lot persuading in the upcoming weeks.

Is Durant enough for the Celtics to truly be contenders in the East?

"We're steps away. We're a couple pieces away, I think from being contenders in the Eastern Conference," added Thomas. "We won 48 games this year with a team that people didn't think could do that. That says a lot about the direction we're going in and I know Danny and those guys in the front office are going to do whatever they can to make this team the best possible team it can be." [ESPNBoston]

As for his messages about Durant on Twitter, Thomas said that’s not the end of his recruiting efforts. But he wouldn’t go into further details than that.

“I’m not going to tell my secrets,” he said. “[Because] then the other guys will try to use it.” [USA Today]

Let's just hope the efforts don't include holding a boombox (if she don't know what this is, she's too young for you bro) over his head standing outside Durant's window with Peter Gabriel playing...