Celtics Draft 2016 - The Worst Night Of The Danny Ainge Era 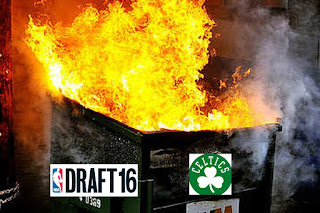 Everything was supposed to get better on Thursday Night.

The Celtics were stocked with a multitude of draft picks that would make any NBA GM jealous. This was the night where the rebuild would end! The Celtics were going to cash in on there treasure trove of assets for the elusive NBA All-star that we've all been waiting for.

It was all so promising.

Right before the draft, Adrian Wojnarowski dropped some miniature Woj bombs about the Celtics. They were in advanced talks with not one, but two teams! The Bulls and the 76ers were both coveting the #3 pick, and life was good. Trader Danny is going to get it done!

(Insert sound of record getting stopped by the DJ suddenly, or a train trying to slam on the breaks before derailing, or the sound of a atomic bomb going off. Basically, insert what ever sound effect in your brain that means chaos, failure, and sadness)


With the 3rd pick in the NBA Draft the Celtics selected ... Jaylen Brown?

With the 16th pick in the NBA Draft the Celtics selected ... Guerschon Yabusele?

With the 23rd pick in the NBA Draft the Celtics selected ... Ante Zizic?

This is not a joke. It actually happened.

There is no trade. None of the players that were drafted by the Boston Celtics were going to go in the next pick. This draft is just another example of Ainge trying to be the smartest guy in the room. There is no Jamal Murray, Kris Dunn, Dragan Bender. Nerlens Noel is staying in Philly, Jimmy Butler is not coming to Boston. The Celtics and Danny Ainge just drafted what could go down the worst draft class in Boston Celtics history. (and that is saying something!) 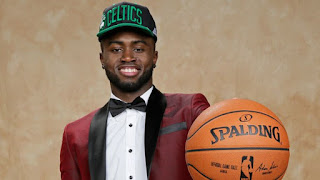 First off Jaylen Brown was a stretch to take at the 3rd overall pick. He is a 19 year old swingman who is athletically gifted but has arguably the worst jump shot in the lottery. The Celtics did not need to draft him at #3. Not even close, there were rumors he would have dropped as low as #8. If this was the Celtics guy, they easily would have been better off moving back.

Brown is just such a bad pick for what the Celtics should be trying to do. It's not that he is a bad player. He very well could come in and take the league by storm but from what all the experts are saying he is more of a project. Boston needed to come in and use this asset to make the team better next year, but failed to do so.

By the time the 16th pick was up and there was still no trade, Danny Ainge basically grabbed his junk and flipped off the Celtics fans with the following pick. The Celtics absolutely reached for French PF/C Guerschon Yabusele. Again, could be a good/great player, but definitely won't be contributing next year and probably won't be ready until 2-3 years. At #16 they could have had about 5-6 players that could have contributed to next year's team positively but instead we take the French Incredible Hulk and will hope he can make it to an NBA game.

If that wasn't enough to send some Celtics fans on the way to the Zachem, Ante Zizic was the 23rd overall pick to the Celtics. This would have been a fine pick at #23 if the Celtics didn't JUST TAKE A EURO DRAFT AND STASH GUY IN THE PICK BEFORE!!! Zizic is a typical Croatian Center who is just as raw as every other pick Ainge made in this draft. 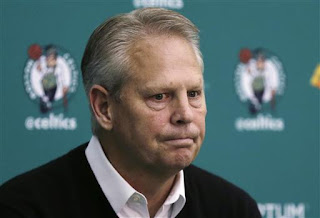 The first round was a sign to all Celtics fans who thought the  rebuild was coming to an end and Danny would cash in these long-term assets for a short-term fix. The truth is, the rebuild is here to stay. We will not be trading for a superstar, and the Celtics will be building through the draft. Ainge has decided that the Celtics will not make a run at the Cleveland Cavaliers next season, and is comfortable middling in the Eastern Conference for years to come.

Overall, the Celtics and Danny Ainge couldn't have screwed the 2016 NBA Draft up more. It was an absolute debacle and who knows if anything will ever come from it. I can tell you one thing for sure, drafting Jaylen Brown and two European dudes who won't play in the league next year absolutely doesn't help Boston become a better destination for free agents. You think Kevin Durant has any faith in Ainge now after he is the laughing stock of the NBA draft? Is any big name free agent lining up saying, 'well I was considering going to the Rockets, but now that the Celtics drafted Guerschon Yabusele, BOSTON HERE I COME!'?

I am still halfway thinking that this is all a joke, and that Danny Ainge has trades lined up he just wanted Boston to crucify him first before he comes out and says, 'Oh, I forgot to tell you I was drafting for Chicago all last night! GOTCHA! See, what a funny jester I am, as well as a masterful GM!'

It won't happen, we are left to try and figure out what the heck this debacle of a draft really means for the Celtics long term rebuild and accept the fact that that Celtics will be lucky if they repeat last year's success.