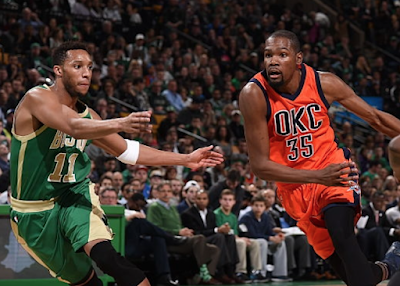 As a team with more salary cap space than they've ever had, the Celtics are prepared for their meeting with this year's top free agent.

There are only two other teams with less money committed to salary for next season -- the 76ers and the Lakers -- two teams that are far from playoff contention, whereas the Celtics were one of the better teams in the Eastern Conference last season and are hoping to sign the player who would put them neck-and-neck with the champion Cleveland Cavaliers -- Kevin Durant.

Unable to swing a deal on draft night, the Celtics brass addressed their biggest needs as they head towards July 1 -- the first day of free agency.


"The biggest needs as we look at it are continuing to grow on the offensive end, and what we decide to do with regard to protecting the rim," Celtics coach Brad Stevens said. "You can protect the rim in a couple of different ways. No. 1 is you have somebody in there to protect it. No. 2 is you don't let the ball get there, and you need versatile guys at a bunch of different positions. You need to keep guys out of rotations. If you look at our team right now, No. 2 would be more of the option."

Rim protectors are hard to come by in the NBA and after a potential draft day trade for 76ers center Nerlens Noel fell through, the Celtics will turn to the free agency pool to look for a post or wing defender after they take a stab at Durant. It's also not easy to acquire a scorer but that's not stopping the Celtics from trying to sign one of the best ones in the league.

The Celtics have earned a meeting with a superstar talent in Durant -- who's only going to sit down with five other teams. But unlike the Thunder, Warriors, Spurs, Clippers, and Heat, the Celtics have enough cap flexibility to sign another top-tier free agent to place alongside him -- a luxury the Celtics may not have had if a trade was made last Thursday.


"There's a lot of talk about trades at this time of year and there's fewer trades made at this time," said Celtics president of basketball operations Danny Ainge. "A lot of reason is preparation for free agency and cap flexibility and a lot of trades being proposed and the trades that were even being done are capable of more, they potentially prohibit you from doing your plans in free agency and so there were a lot of calls. Brad's working hard. We're on the phone and talking and he's bringing me like two or three typewritten sheets of paper on what he thinks. His involvement is huge in this process and his input is very well-valued as all his coaches are."

Historically, the Celtics are a franchise that has never reeled in a big-name free agent. Still, Ainge didn't think any trade offer he saw on draft night was worth sacrificing his team's cap flexibility. Although aside from Durant the talent level of this summer's free agency class significantly drops, cap space is certainly a great selling pitch.

If Al Horford, another free agent available for the Celtics to target, really is someone Durant wants to play with, the Celtics can go out and get him without losing any of their core players in Isaiah Thomas, Avery Bradley or Jae Crowder.


"It's all part of the picture. So [Thursday], you didn't see very many transactions, trades involving players," Ainge said. "There were a few. But no huge big-name players. A few solid role players that were traded. Those could have major impact on flexibility. So we had opportunities to do some trades but there weren't significant enough of an upgrade to our franchise to do and we felt like it was more important to preserve flexibility this summer."