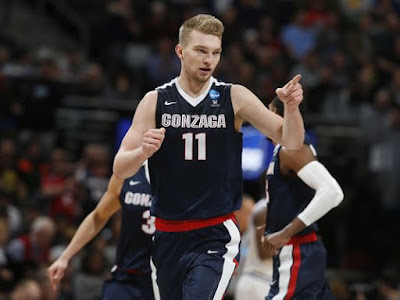 Sabonis made a name for himself as a high-energy guy who possesses a unique balance of inside scoring along with rebounding and passing. However, the 6'10 standout admitted that he hopes to improve his game in many different ways but is confident that he can help an NBA team in rebounding and would be a great teammate to have.


"I think I have to improve everything overall," Sabonis said. "I need to be better in everything. But if I could bring something now, it would be energy, rebounding, helping my teammates. I think I can find my open teammates, facilitate, rebound, bring energy, play in the post." [Boston Herald]

Sabonis is projected to go anywhere between picks 14-20 -- so there's a good chance he may still be on the board for the Celtics at No. 16.

One guy who would love to see Sabonis in a Celtics uniform is his dad, former Trail Blazer, Arvydas Sabonis.


"Oh, he's a big (Celtics) fan," Domantas said of his dad. "His favorite player was Larry Bird. His favorite color's green, so he loves it even more. Just everything about the team -- the tradition, the winning, everything." [Boston Herald]

Sabonis averaged 12 points, 7.3 rebounds and 1.1 blocks for the Trail Blazers, where he played his entire seven-year NBA career that started at age 31 after he played 14 seasons in Europe.

Arvydas followed his son's two-year career at Gonzaga and would talk to Domantas after every game. Domantas idolizes his father -- one of the things he especially loved about his father's game was his passing.


"To me, he's my idol. He's the best there is," Domantas said about his father, Arvydas Sabonis. "I don't think there'll be another one like him.

"I always look at the way my dad passes out of the post and finds his players. He makes his teammates better, which is really awesome to me." [Boston Herald]

One of the Celtics who gave Sabonis advice before heading into the Celtics' practice facility was former Gonzaga forward/current Celtic Kelly Olynyk.


"I usually talk to him in the offseason," Sabonis said of Olynyk. "When he comes back to Gonzaga, he usually helps me out. He helps me a lot in the summer.

"He told me to prepare myself for the three-minute run," Sabonis said with a smile. [Boston Herald]

Much like his father, Domanatas knocks down the majority of his points from inside the paint -- a big reason why he shot 61 percent from the floor last season while averaging 17.6 points and 11.8 rebounds.

Another mid-first-round prospect who was in Waltham last week was Cheick Diallo -- who continues to soar upwards in mock drafts.

A big reason why Diallo is trending upwards is because of his athleticism and defense. His 7'5 wingspan should translate into natural shot-blocking abilities in the NBA along with good defense given his 6'9 frame.

Diallo didn't have a one-on-one workout with the Celtics like Sabonis did, but he did participate in group session along with Richmond's Terry Allen, Norte Dame Zach Auguste, Cincinnati's Farad Cobb, Georgia Tech's Adam Smith and Adam Pechacek of the Czech Republic.