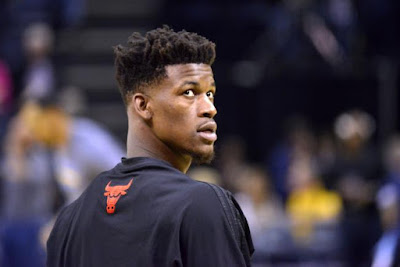 With Celtics fans (and Isaiah Thomas) drooling at the thought of seeing Kevin Durant in a Celtics uniform next season, here's a plan on how to lure Durant to come to Boston.

It's going to take a whole lot more than a tweet from Isaiah Thomas to reel in Durant. The only way the Celtics can grab the All-star's attention would be to add another franchise-changing player who would bring Durant in to create a new Celtics 'Big Quartet.'

According to Butch Stearns, who was a guest host on WEEI on Monday morning, Durant's people have informed the Celtics which players Durant would love to team up with.


"I have pretty good authority: The Celtics have sat with his agent and other representatives of Durant. The Celtics do know -- I don't know who it is -- but they do know who he would prefer to be brought here in a LeBron [James]-Chris Bosh-Dwyane Wade-like way. Because that's how it works in the NBA. You need to know who the guy or guys that that guy wants, which would be a factor," Stearns said.

But who are these players? Well, if you ask me, they are names that have already been linked to the Celtics -- these names are on Durant's "wishlist" of guys he would love to play with.

Here's the first guy, the most important player the Celtics need to trade for in order to get the ball rolling.


After a very disappointing season -- where the Bulls missed the playoffs for the first time in eight years -- Jimmy Butler and Bulls head coach Fred Hoiberg were the center of the team's season-long woes. Chemistry plagued the locker room in Chi-town and with one free agent (Pau Gasol) most likely on the move to join a championship contender and another (Joakim Noah) already telling his teammates he's not coming back next year, it's time for a fresh start in the windy city.

With hope that the other dominoes will fall after this draft night blockbuster deal, Danny Ainge rolls the dice by trading two of his biggest roster pieces and ties a bow around it with the No. 3 pick in this year's draft -- giving the Bulls the player they reportedly wanted at the deadline (Crowder) in exchange for their All-star guard. There's no guarantee that the Bulls will accept a proposed deal that doesn't include Jae Crowder and Avery Bradley -- a packaged deal I think the Bulls requested last February and ultimately ended talks between the two teams. But with Pau Gasol's future in Chicago hanging in the balance and Derrick Rose in the twilight of his career, this deal will give the Bulls an opportunity to rebuild their roster and trading Butler's contract creates cap space. This deal puts them in decent shape with two very team-friendly deals that are signed through at least 2018 and a top-3 draft prospect.

This move is a risky one for the Celtics, -- it's a lot to give up for Butler and if it doesn't lead to landing Durant, some would view it as a disappointment. But it's an offer no other team can put on the table for Butler and one that will be hard for the Bulls to turn down. However, this is how much it will cost for the Celtics to land Butler and without a top-talent like Butler, Durant will not consider taking his talents to Boston.

Ainge has to take a risk here.

The next step in the guide to land Durant is to sign another free agent before Ainge and co. go after KD. His name isn't going to blow you away but he's an All-star veteran whose name was also rumored to be on Durant's wishlist -- a big reason why the Celtics are expected to try to sign him this summer. 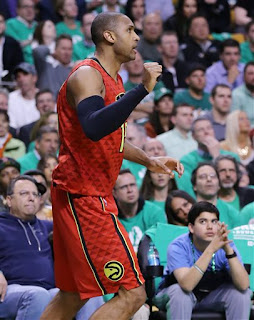 The Hawks are expected to make a strong push for trying to sign Durant but fortunately for the Celtics, Horford is a free agent and there's a lot of question marks surrounding the Hawks. Horford will receive plenty of offers from teams like the Rockets and Magic but with the Hawks looking as if they may be a few steps behind in becoming a contender in the east, Horford will explore his options. For starters, their point guard Jeff Teague's future is uncertain. His name was thrown into trade rumors before last season's deadline, he's on an expiring contract and his understudy in Dennis Schroeder is inching closer to taking his spot in the starting lineup. Horford, along with Kent Bazemore, Kirk Hinrich and Kris Humphries are also free agents -- there's no telling what the Hawks will look like by the beginning of next year. This may be Horford's last chance to join a championship-contending team while he's still an All-star forward in the league.

Landing Butler makes signing with the Celtics a no-brainer for Horford -- a deal Horford signs on July 1 -- and eventually Horford, Butler and Isaiah Thomas will show up at Durant's front door to convince the superstar that they are one piece away from becoming a title contender. In an inferior Eastern Conference, the quartet of Isaiah Thomas, Durant, Butler, and Horford would challenge the likes of LeBron James, Kyrie Irving and Kevin Love.


No matter how you slice it, this is a scary starting five. The Celtics quartet puts them right in contention for an Eastern Conference title.

Also, they already have a sixth man off the bench who can produce on both ends of the court. Keeping Bradley on the roster places him in the 6th man role. The top-notch defender would give the Celtics options at the end of the game -- a double-digit scorer who can defend the best guards in the back court and knock down big shots.

If the Bulls ultimately decide they want Bradley or no deal, than the Celtics will have to place Smart into this sixth man role. Smart, who is not far from blossoming into a Bradley-like defender, still has a long way to go offensively.

However, the Celtics' 2013 Draft night trade with the Brooklyn Nets truly is the gift that keeps on giving -- with the Nets on pace for another lottery season, the Celtics may end up with another top-5 pick in the 2017 NBA Draft. Unlike the 2016 draft, the 2017 draft is projected to be stacked with talented NBA-ready players throughout the first round -- giving the Celtics a potential rotation player to choose from next season to add to their already contending squad.

Durant, who's a top-3 scorer alongside two 20-point scorers and an All-star forward is more than enough to win the Atlantic Division title. Led by Durant, the Celtics would be poised to dethrone LeBron James and the Cavaliers. Butler is also one of the toughest defenders in the league and Al Horford is a great fourth scoring option.

The motivation would be at an all-time high for all four guys, and behind a passionate city that's been waiting eight years to see another banner raised at TD Garden -- this could be the beginning of a new age Celtics dynasty.