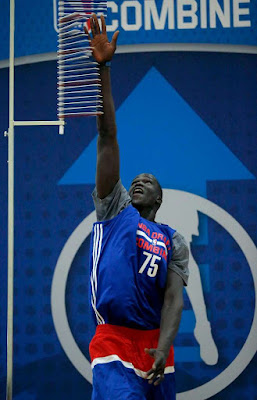 It's tough to say where Thon Maker will be selected in Thursday night's NBA Draft, but one thing's for sure -- he's come a long way.

Projected to be a late first-round or early second rounder, Maker took an unconventional path towards the NBA draft. Instead of heading to college after high school or heading overseas for a year in order to meet the NBA's age rule requirement, the seven-foot-one center stayed another year at Orangeville Prep in Toronto as a postgraduate.

At 19, he's now eligible for the draft -- a decision that required a ruling from the NBA this past April to determine his eligibility -- and has a chance to become the first teenager since 2005 to be drafted in the first round without playing college, D-League or international ball.

Maker expressed the confidence in himself while speaking to CSNNE.com's A. Sherrod Blakely after his workout with the Celtics.

His 7-3 wingspan makes him an ideal rim protector but his strength and basketball-IQ is still a concern as he heads towards draft night. Rebounding is certainly his biggest strength, however, his NBA-readiness remains uncertain.

Austin Ainge, Celtics director of player personnel, said Maker "played very well," and added that he "played very hard," in his workout with the team. [CSNNE.com]

Maker, who was born in what is now South Sudan, left shortly afterwards when him and his family were accepted as refugees by Australia. By age 14, Maker began playing basketball and migrated to the U.S. just before high school. He settled in Virginia during his freshman and sophomore years when he averaged 22.2 points and 13.1 rebounds at Carlisle school.

By his senior year, Marker relocated to Canada where he enrolled at Orangeville District -- a secondary high school, located just outside Toronto. Orangeville also provides the academic instruction for Athlete Institute -- an elite basketball prep school.

Instead of heading to Indiana, Kansas or Kentucky -- just a few of a large number of colleges that he was being recruited by, Maker reclassified into the 2016 class. Without any collegiate or professional ball experience, it's tough to predict how high his ceiling will be in the NBA.

Still, Maker will definitely be selected by a team at Thursday's draft, and even if he does fall out of the first-round -- that's not something that he's at all worried about.


"I didn't care too much about being ranked," said Maker who added that he's likely to work out for three or four more teams. "I just cared about getting better at all times. There was times when I moved to Canada and nobody spoke about it. You just have to keep trying to get better." [CSNNE.com]

If the Celtics ultimately decide to pass on Maker at No. 23, he'd be worth a selection at Nos. 31 or 35 in the second round if he's still available.

The Celtics have an absurd amount of draft picks. Whether Maker is a bust or not, taking a swing on a 7-foot-1 teenage big man in the second round is something that's never frowned upon.