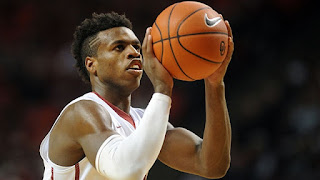 As the Celtics prepare for June 23rd's NBA Draft, Causeway Street will be reporting on the Celtics' pre-draft workouts with prospects for first-round picks 3, 6, and 23.

After the Celtics watched Kentucky's Jamal Murray drop a record-breaking 79 out of 100 from deep in Waltham last week, Buddy Hield was the successor to the Celtics' pre-draft workout 3-point shooting record on Monday in a one-on-one workout in California.

According to ESPN's Jeff Goodman, the Oklahoma sharp-shooter drained 85 of 100.


Hield, who's considered to be the best shooter in this year's draft class, is certainly a candidate for the Celtics' No. 3 pick in next week's draft. Celtics president of basketball operations Danny Ainge and head coach Brad Stevens both flew to California for Hield's workout, Ainge spoke to Boston Globe's Adam Himmelsbach:


"It went well," Ainge said by telephone. "I would say there were no real surprises. Buddy Hield is a really good shooter and a hard-working, well-conditioned player. He's a great kid and a guy that's ready to step in and play. Very, very, impressive."

For a guy who played all four years at Oklahoma, Hield may not have a lot of upside but is someone who's being compared to scoring guards like C.J. McCollum, James Harden and the league's reigning 2-time MVP Steph Curry.

However, the jury is still out on how well Hield's ability to attack the rim will translate in the NBA and how well he can score off-the-dribble -- the same questions that were asked when guards like McCollum and Curry were making the leap from college ball into the pros.

Hield did significantly improved on his handle throughout his four years at Oklahoma and has the right work ethic to continue to get better. His work ethic is certainly one of his strengths, as a 6-foot-5 guard, Hield worked hard on his ball handling in order to become a potential NBA-ready combo guard.

If he can go beyond being just an outside shooter, there's no doubt he will have a bright future in the NBA -- but is still considered a 3-point marksman and a top-5 prospect.

Hield's numbers reached new heights across the board his senior year when he posted averages of 25 points, 5.7 rebounds and shot 50 percent from the floor, including 45 percent from deep.