Why Kevin Durant will not become a Celtic 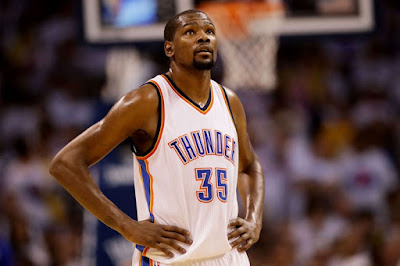 It's been a little more than a week since the world or 19.8 million people to be exact, according to TNT, watched Kevin Durant and the Oklahoma City Thunder cough up a 3-1 series lead and lose in Game 7 of the Western Conference Finals to the Golden State Warriors.

Unfortunately, unlike most Celtics fans, I'm not jumping for joy or have gone to any #KD2Boston rallies in the last week in hopes of a top-three player in the NBA coming to Boston. Despite Durant becoming a free agent next month, I don't think he's going to choose the C's.

Don't get me wrong, I'm not a 'Negative Nancy,' just trying to be realistic. Besides, history has shown me that time and time again Boston has never been at the top of any NBA star's short list. I've had some time to process and see all the countless 'recruitment' efforts so far (not that there won't be any more in the coming weeks), and I'm not impressed.

Thats why I've come up with a few reasons why Kevin Durant will not be in Celtics green next season or beyond:
Since he's been eliminated from the playoffs, I have barely heard or read Boston get mentioned much (other than local media) as a possible destinations KD could end up in. Such locations I do keeping reading or hearing about include: San Antonio, Golden State, Miami and even Toronto (get ready for a month full of Drake songs and or mixtapes with Durant mentions). All these cities have one thing in common, they are going to make a crazy pitch to the most sought out free agent since 2010.

From LaMarcus Aldridge and Pop just saying 'come on man really? What more do you want?' To the Warriors, who are on the verge of winning another title, and moving from Oakland to San Francisco, what better way to open a new arena with a new championship banner and two league MVP's on the roster?

Can't forget the great Pat Riley and the tax free state of Florida as a perfect place for Durant to bring his talents to try and help D. Wade win a ring or two before he hangs it up. Then there's the up and coming city north of the border, that could make Durant the face of Canada for years to come.

Got to seriously consider those places and what they can bring to the table as better landing spots than Boston.

I haven't even mentioned the fact that Durant could stick around in OKC for all we know. Sign a two-year (player option after next season) max deal, probably worth somewhere in the ball park of $50 million. Since Russell Westbrook still has one more year left on his current contract, why not take another crack at coming out the west next season, thus being able to opt out in the summer 2017 (where C's fans will be doing their rain dance all over again), and being able to make upwards of $208 million on a five-year deal with the Thunder (courtesy of his Bird rights of course)?

Whether Durant signs a max deal in Oklahoma City or elsewhere this summer, the veteran can make anywhere between $50-100 million dollars more on a deal beginning next season if he stays put.

What could Boston offer next month that would make Durant leave that kind of money on the table with the roster the Celtics currently have? Even though it's been reported that the C's somehow 'know' through KD's people who he would like to play with [see possible list here], that's a task easier to dream about than to actually get done.

Other than Kevin McHale (C's fans can't thank him enough for that 17th banner), who else would want to help Danny Ainge or the Celtics for that matter, become contenders again?

Which leads me to my next point...


In 2007 (wow nearly a decade now), the basketball Gods were well aware of a cursed franchise for the last 20-years known as the Boston Celtics, who were once looked at as one of the best in all of sports. But at that moment they were a laughing stock after coming off the worst season in their history, which included an 18-game losing streak.

With the Kevin Durant and Greg Oden sweepstakes well underway at that point (talk about a team like the Trail Blazers who have had some bad luck), all the Celtics needed was the number one (or at worst the number three) pick right? Wrong! With the fifth pick, the C's looked like they were going to fire Danny Ainge and continue to lose, until talks of former NBA MVP (only three seasons removed) Kevin Garnett possibly setting up shop in Boston began to unfold.

Of course I laughed at that ever happening, hell I saw KG in Phoenix with a sure championship to follow. Even Garnett himself said he would never come to a place like Beantown, so I figured trade Paul Pierce so the C's could just start from scratch.

But the lord decided that July 31, 2007 would be the re-birth of the Celtics, that the suffering for their fans had been long enough and blessed the city of Boston with the arrival of 'The Big Ticket,' in Garnett. For the next six years, three Eastern Conference Finals appearances, two trips to the NBA Finals and one championship, the Celtics were relevant again and contenders every season of the new Big 3 era. All was right with the world.

Without McHale and Chauncey Billups (who KG spoke to about Boston, despite the point guard only being in town for seven months back in 1997-98 season) and the Celtics trading away the No. five pick to Seattle for Walter Ray, we wouldn't be having this conversation.

But of course all good things must come to and end and as simple as those two trades were to make at that time, it's a whole different ball game now in the summer of 2016.

The basketball heavens have not seen the Celtics fans suffer enough to merit a 'blessing' once again in the shape of another former league MVP named Kevin. Boston is just not that lucky, at least when it comes to the green team. I understand the win now mentality, but the Boston sports fans have been spoiled for almost two decades now.

Danny Ainge has become the kid with all the cool toys that no one wants to play with because he has outsmarted his friends at one point or another. This president of basketball operations with too many assets and no trade partner is going to have a hard time making the Celtics more attractive for Durant (who can sign to one-year and re-sign next summer to a max deal due to his 10-year status in the league) to come join his roster.

After acquiring such players like Isaiah Thomas and Jae Crowder last season, plus  three first round picks from Brooklyn in 2013 for Pierce and Garnett, who wants to help Ainge again? (This also goes for the NBA Draft in a few weeks when no one will what to feel bamboozled by Danny when he shops around his picks)

At 6-foot-10, Kevin Durant has had his right foot operated on three separate times in a span of six months that date back to the 2014-15 season. Durant underwent surgery to repair a Jones fracture that limited him to only 27-games played. Though relatively healthy this past season (72-games played), history has reminded us of great players such as Kevin McHale, Bill Walton, Grant Hill, Yao Ming and even Greg Oden; where foot injuries have cut careers short, especially if you're close to seven feet or taller.

Do the Celtics want to put all their eggs into a Durant surgically-repaired foot basket? Is the 2014 MVP damaged goods? I know it's a different era for the most part, but nagging foot and knee injuries have been the grim reaper to NBA players for a very long time.

So Should Ainge really take the risk and pay all that money? He, along with McHale and Walton were Celtics teammates in the 80's and he witnessed it first hand how those two played through foot pain, that eventually led to their retirement.

Just look at how McHale walks now a days.

I get it, Durant was a league MVP (2014) already and has made to the NBA Finals once (2012) in his nine-year career, but he hasn't won anything yet. The same way critics who have crucified LeBron James for only winning two-out-six possible championships, at least James had one ring by year nine, while KD has yet to get over the hump in the same amount of time (while most would prefer to have him over LBJ on their squad).

In fact, four out of the last five teams to beat OKC in the playoffs have gone on to win the NBA title (Lakers, Mavericks, Heat & Spurs) now you could probably add the Warriors to that list after the Thunder were up 3-1, and lost three straight just over a week ago.

Who can forget the Heat in the 2012 Finals (LBJ's first championship)? After winning Game 1, Oklahoma City would go on to lose four straight and haven't played a series in June since.

Speaking of LeBron, the king of the East, he owns a 13-3 career record against Kevin Durant, including 4-1 in the postseason. Durant is currently on a nine game losing streak against Bron-Bron, his last win against James came on January 29, 2014.

Seeing as to grab the Eastern Conference crown (the Celtics were the last to hold it before James' six year run so far), you have to go through LBJ, who just so happens to be Durant's kryptonite. If KD were to make a move to the Celtics or the East, he'd have to battle James for many years to come, and that hasn't ended well for him thus far in his career.

So can the Celtics get by LeBron and the Cavaliers even with Durant on the roster despite history not being on their side? The jury may still be out on that one.

The way I see it, Isaiah Thomas can make as many phone calls or send as many texts messages and or tweets to the the top pending free agent; Kevin Durant and it won't make much of difference. Even if the Celtics know what players to go after, it's not a guarantee that Durant will make Boston his new home this summer or next.

Even though the Thunder choked against the Warriors, Durant was still one game away from reaching the Finals for the second time in four seasons. Why wouldn't Durant want to take another crack at possibly beating the Warriors, especially since the Thunder beat the Spurs in six games as well?

I'm not saying Ainge has no shot at acquiring an All-star, but this is just the beginning of a year-long quest to try and pry Durant from OKC or whoever he chooses, that will ultimately end the way it always does for the Celtics when trying to land a top-tier free agent...in disappointment.

Listen to our Kevin Durant to the Celtics discussion on the Causeway Street Podcast below: