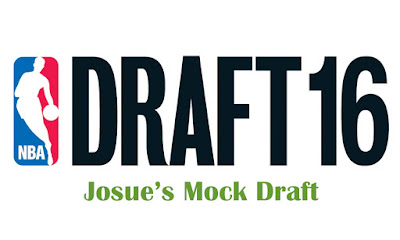 Sean Dutra and I will have 2.0 versions of our dueling Mock Drafts leading up to June 23. Here's my 2.0 version, Sean's will be posting his before next week's NBA Draft. 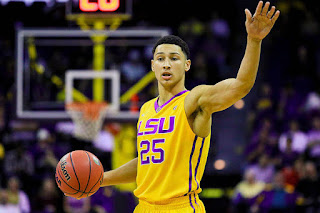 Still going with Ben Simmons at No. 1 for Philadelphia for his versatility. Although Simmons has declined to meet with Philly (very odd), his long 6'10 frame and high ceiling is the best pick for the 76ers at No. 1. So like it or not, you're going to Philly, Simmons. 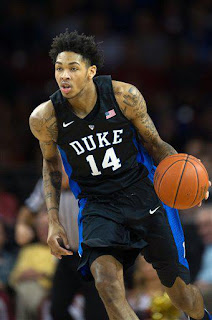 Los Angeles will make you think that they're actually considering going another direction with the second pick but in actuality -- they're going to draft Ingram. Luckily for the Lakers, Julius Randle was a double-double machine last year so the fact that they passed on Jahlil Okafor for D'Angelo Russell doesn't look that bad (all snitching aside). This time around, the Lakers can't pass on Ingram. They need a small forward and Ingram is arguably the best scoring wing player in the draft. He'll contribute right away. 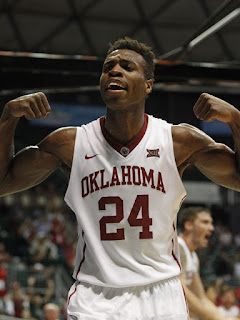 Buddy Hield would give the Celtics a knock-down 3-point shooter -- the kind of scorer Brad Stevens' offense has been itching for. Hield consistently stretches the floor. Having him on the floor would instantly open lanes for Isaiah Thomas and Marcus Smart. He'd be a spark off the bench -- a high-energy guy with some room to grow. 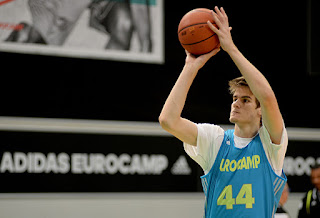 There's no doubt that Phoenix will use their No. 4 pick on a stretch-four and even though it may take a couple of years for Dragan Bender to flourish into a scoring big man in the NBA, the Suns still like him. With the draft only a week away, they have been considering drafting Marquese Chriss -- who's now considered as this year's best NBA-ready scoring big man but will most likely go with the guy with the much higher ceiling in Bender. 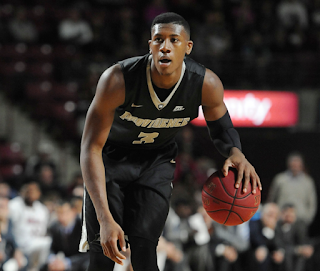 In a recent interview, Timberwolves point guard Ricky Rubio, who has never reached the playoffs in his four-year career, expressed his frustration in Minnesota and says he wants to be traded to a playoff contending team. If Minnesota is able to move Rubio in a trade that doesn't include the No. 5 pick, Kris Dunn would be the Timberwolves' ideal pick. He's the best point guard in the draft -- a facilitator who can score and defend. Even if Minnesota doesn't deal Rubio on draft night, Dunn would still be a good choice as a temporary back up for when the Timberwolves and Rubio eventually part ways.


Marquese Chriss' stock has reached top-5 range in mock boards -- he's arguably the most explosive front court player in the draft. He can knock down mid-range shots, get to the rim and show great intensity. Chriss has the potential to slide into a unique Ryan Anderson-like role for the Pelicans and has plenty of upside.

The Nuggets need a shooter to complement Emmanuel Mudiay in the back court -- Jamal Murray fits in nicely. He's an offensively skilled guard with a mid-range jump shot and has the athleticism to take it to the hoop and finish at the rim.

Two years from now, Jaylen Brown may end up being one of the top-five best players in this year's draft. He has the kind of game that fits this new-era of NBA basketball -- a two-way guy who will blossom into a defender that can guard up to four positions and slash to the hoop on the opposite end. Think of Draymond Green without a 3-point shot, I'm calling it right now. The only reason Brown will slip down to No. 8 is because it's going to take him a few years to polish his skills, where most of the guys ahead of him can contribute right away. However, Sacramento can use an athletic defensive wing off the bench -- it's a great pick for them. 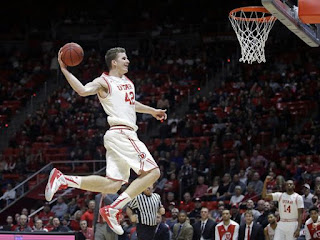 What a great way to replace Bismack Biyombo. Jakob Poeltl is a 7-foot-1 power forward/center that can get it done on both ends of the floor. He can not only crack the Raptors' rotation but also adds size and great footwork near the rim. Poeltl won't protect the rim like Biyombo, but his offense makes up for it.

If it wasn't for Poeltl's offensive skills, the Raptors would be taking Deytona Davis -- a rim protecting forward and a solid rebounder (he's a young Bismack Biyombo). He's a good fit for Milwaukee. One of the biggest knocks on Greg Monroe is his interior-defense -- with Davis at No. 10, he'll give them that boost off the bench.

As a 7-footer, Skal Labissiere can defend the paint and run the floor for Orlando. He's raw, he's going to be a project in Orlando but has the skills to become an everyday player.

As an emerging shooter with NBA-ready athleticism, Timothe Luwawu can also defend and is coming from one of the better European programs (Serbian league). Compared to Furkan Korkmaz -- who has a similar offensive style -- Luwawu is starting to look more like the 'full package' in the same 6'7 frame as Korkmaz. From off the bench, he can contribute to Utah's young core. 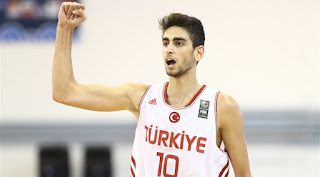 What makes Furkan Korkmaz a lottery pick in this year's draft is his efficiency in shooting the deep-ball -- he shot 41 percent from beyond the arc in the Euroleague last season and has great size at 6'7. He turns 19 next month, so he's raw but the Suns could be drafting a gem at No. 13.

Whether the Bulls are able to trade Derrick Rose or not, they need to draft a point guard in this year's draft and behind Kris Dunn, Wade Baldwin is the best one they can find. He's 6'4 with a 6'10 wingspan, is definitely a scoring point guard and has plenty of upside.

Due to the two European shooters entering the lottery picks, Henry Ellenson has fallen a bit in my mock draft but is a good pick for the Nuggets at No. 15. He can shoot from the mid-range and produce in Denver. 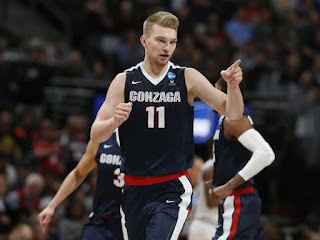 I'm still sticking with Domantas Sabonis for the Celtics' No. 16 pick. He had a good workout in front of the Celtics brass in Waltham and is an ideal big man for Brad Stevens' system -- meaning he can run the floor and shoot from inside the 3-point arc. His ability to grab defensive rebounds also makes me like him a lot for the Celtics. And his high-energy makes me like him even more. Plus, his dad Arvydas Sabonis, is a huge Celtics fan so Domantas already knows what wearing a Celtics uniform is all about and wouldn't want to let dad down if he ends up donning a Celtics uniform. Talk about an extra motivation factor.

The Grizzlies have their eyes set on Wade Baldwin potentially dropping to them at No. 17 but if they decide to stick with drafting the next best point guard in the draft -- Demetrius Jackson is their man. Jackson is certainly a pass-first point guard and can keep up on the defensive end.

There isn't one particular thing that Denzel Valentine is great at but it's his high basketball-IQ that Pistons head coach Stan Van Gundy will love about him. If you had to pick one thing Valentine is very good at, you'd have to say it's his passing. He may be the most fascinating player in his draft class and probably the smartest. Valentine can also get to the hoop.

After being projected as a late first- or early second-round pick, Malachi Richardson is now seen by most critics as a top-20 guy. Fresh off his workout with the Nuggets, Richardson has a natural scoring ability in his outside jump shot and has the potential to become a good perimeter defender. 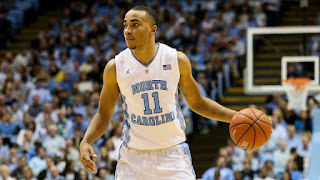 Brice Johnson and the Pacers is a great fit. The athleticism and jump shot-making ability could give him a small role with them in his rookie season. He's a 6'10 forward and reminds me so much of Taj Gibson -- the type of power forward who can flourish in Nate McMillan's offense.

Taurean Prince's ability to defend the wing and guard multiple positions will convince the Hawks that they should take him at No. 21. He's their next DeMarre Carroll.

The athletic rebounding big man has moved up the charts a bit -- Damian Jones gives the Hornets an effective rebounder who has the potential to develop into an NBA-shot blocker. 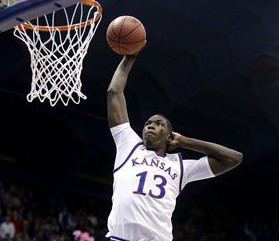 The Celtics can roll the dice with Cheick Diallo at No. 23 -- he's a raw talent but gets the benefit of the doubt because of his 7'4 wingspan in a 6'9 frame. He can get to the hoop, finish well in the fast break and is worth seeing his potential blossom in Maine's D-League next season.

DeJounte Murray's handle and explosiveness will entice a late first-round team to pick him in this year's draft. He has the potential to be an NBA-scorer and Philadelphia is a good place for him to get his feet wet in his rookie campaign.

I'd be surprised if the Clippers didn't draft DeAndre Bembry at No. 25. Unless he's unavailable, he's the ideal player for Los Angeles -- a classic wing scorer who possess the explosiveness to finish at the rim in Doc Rivers' offense.

The Croatian 6'11 big man has the potential to squeeze himself into the first-round of this year's draft. Philadelphia can afford to take a swing with a center at No. 26 after drafting the top prospect and a point guard. Ante Zizic's biggest strength is his great hands. He can gather rebounds, finish above the rim and has a back-to-the basket type of offense. 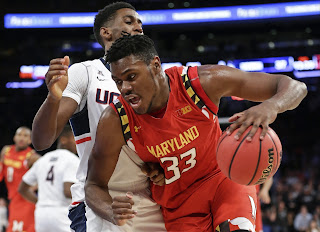 The bulky big man with a knack for rebounding gives the Raptors another effective big man off the bench. Diamond Stone may not be a lot of playing time in his rookie season, but the big fella is a hard worker and a solid pick this late in the draft.

Some may not have Tyler Ulis this low on their draft board but I think his size and limited offensive abilities is going to hurt his chances in being drafted top-25 in this year's draft. With better well-rounded point guards like Kris Dunn, Wade Baldwin, and Demetrius Jackson ahead of him, Ulis will be taken late in the first-round or early second-round. He's a great facilitator and decent one-on-one defender but he's going to have to work on his scoring if he wants to have a lengthy NBA career. But Phoenix is a great place for him to start.

Could Thon Maker be the steal of the draft? If there's one team that knows about drafting gems in the late first - early second round, it's the Spurs and with Tim Duncan on the verge of hanging it up sooner rather than later, it's time for them to start looking for a power forward that they can develop. Maker is most comfortable when he's scoring in the paint, he's 7'1 but can knock down a few jump shots from inside the perimeter and is quick on both ends of the floor. If the Spurs do pass on Maker, expect him to be selected in the early second-round. With his size and raw speed, he won't fall too far down the board.

As a 6'9 stretch-power forward, Juan Hernangomez certainly fits the mold in Golden State. I don't expect him to stay with the team throughout his first year in the league, but after one season in the D-League, Hernangomez could earn himself a roster spot if he's able to develop into a decent defender.