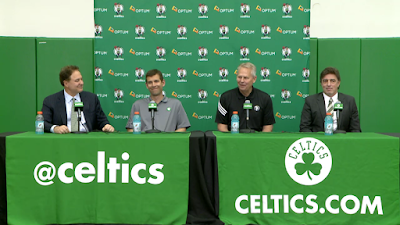 The Celtics extended the contracts of president of basketball operations Danny Ainge and head coach Brad Stevens on Wednesday.

Stevens, who is heading into his fourth NBA season, signed a six-year contract back in 2013, while Ainge will head into his 14th season as the Celtics president of basketball operations. Celtics co-owner Wyc Grousbeck issued a statement on the signings -- he thanked the two men for their hard work and is excited to recommit Ainge and Stevens to long-term deals.


"Danny and Brad represent exactly what the Boston Celtics stand for: excellence on and off the court," Grousbeck wrote. "With their long-term deals in place, we are continuing to build towards competing for Banner 18. Our ownership group thanks them for their hard work and their re-commitment to the Celtics."

While terms of the deal were not released, Ainge and Stevens both issued out statements on the signings and how excited they are about the team's future.


"I am grateful to continue to work in an environment where I'm surrounded by so many people that are an integral part of our success," Ainge said. "We have had great stability in this organization since the ownership group bought the Celtics. We know our strengths and weaknesses and as a group we work well together. Wyc, Irv, Steve, Rich, Brad and I have a common goal in pursuing Banner 18 and I'm looking forward to this next chapter in Boston Celtics history."

In 13 seasons, the Celtics have a .539 winning percentage (565-484) during Ainge's tenure, including 10 playoff appearances, three in the Eastern Conference Finals, two trips to the NBA Finals and a championship. Ainge was the recipient of the NBA's Executive of the Year award in 2008.

Stevens, who had never coached in the NBA before signing with the Celtics in 2013, has made quite a name for himself after his first three seasons. He's a two-time NBA Eastern Conference Coach of the Month award winner, and is coming off a 48-34 record. With a .459 winning percentage, Stevens is honored to be inked to a long-term deal and is thrilled.


"My family and I were thrilled to have been approached with this contract extension," Stevens in a released statement. "We sincerely appreciated the empowering leadership of our ownership and front office, the opportunity to work alongside such a talented staff, the support of our tremendous fans, and of course the commitment and hard work of the players wearing the jersey. It's an honor to be a member of the Boston Celtics -- and we'll continue striving for growth in pursuit of Banner 18."