Jimmy Butler thought he'd be a Celtic in 2011 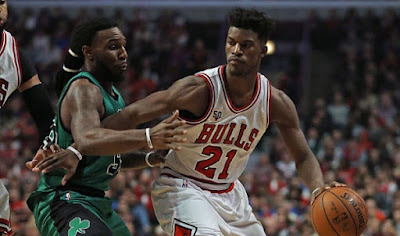 Do you remember when Jimmy Butler almost came to Boston?

Let me refresh your memory because it's not this past February's NBA trade-deadline I'm referring to but instead the 2011 NBA Draft.

Five-years ago Danny Ainge and the Celtics passed-up the chance to draft the future All-Star for Marshon Brooks, who was traded that same night to the Nets, for JaJuan Johnson and a 2014-second round draft pick.

Boston owned the 25th pick that year and traded down two spots, while Jimmy Butler would be picked at number 30 (the last selection of the first round) by the Chicago Bulls.

Doc Rivers would later admit that the C's brass had their eye on three players going into Draft Night: Reggie Jackson (Oklahoma City grabbed him at number 24), Butler and Johnson.

"I like it," Rivers said back in 2011. "Big 10 Player of the Year, athletic, can shoot -- I like it a lot. We didn't think he'd be there and he was. [Johnson can] pick-and-pop, he's a terrific shooter for his size and [is] extremely athletic. Obviously, he rebounded well in college which you hope translates over -- and at [No. 27], that's what you hope for." [ESPN Boston]

While Jackson (Boston College Alum) is on the cusp of being an all-star these days, JaJuan Johnson on the other hand, was traded to Houston Rockets in 2012 (part of the trade that brought Courtney Lee to Boston), then waived and bounced around the D-League for nearly two years.

The forward, now 27, is currently in Europe, where he's been since 2013, playing for his fourth team in that span.

Keep in mind, Johnson was averaging 20.5 points, 8.6 rebounds and 2.3 blocks per game as a senior at Perdure when the Celtics drafted him. So could you blame them for taking the risk on the 6'10 power-forward? One would think after four-years of college plus his height, should have amounted to being ready to contribute to an NBA team contending for championship right away.

That unfortunately was not the case, not even a little bit.

Five-years later, the Celtics are possibly looking to trade for the same player they had their eye on at Marquette and should have drafted.

“What’s crazy is I thought I was going to end up with the Celtics,” Butler said this past week on “The Bill Simmons Podcast.” “Doc [Rivers] being from Marquette [in college], I was ready. But I’m not mad. I went 30th to Chicago, and it’s a good place for me right now.” [Boston Globe]

Despite rumors and reports swirling around as of late of the Bulls looking to move the young vet [see here], Butler has never asked to be dealt.

“I literally, I don’t control that,” Butler said. “It’s not like I’m a free agent. I can’t do anything about that. And so people get mad: ‘Oh, we hate you. You want to leave.’ I never once said that. There’s absolutely nothing that I can do. Literally the only way is if I got traded.” [Boston Globe]

Butler averaged 20.9 points, 5.3 rebounds and 4.8 assists this past season, and the 6'7 guard did remind Celtics fans of one thing he's done during his NBA career.

With this year's draft a few days away, will Ainge look to move the plethora of picks he has to try and acquire Butler?

Only time will tell.