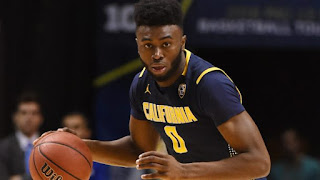 Brown, who visited Waltham last week for a workout with the Celtics, spoke to Boston Globe's Gary Washburn about his time with the Celtics and a great conversation he had with Ainge.

"It went well," Brown said of his workout. "[Celtics president of basketball operations] Danny Ainge is a great guy. We have a connection now that I think is surreal. I like Danny. He was a physical player back when he played, a tough guy. We have the same mentality."

Brown's aggressive approach and athleticism is a big reason why he's projected to be a top five pick in this year's draft. As a 6'7 forward with an impressive 6'11 wingspan, Brown is expected to be an exceptional NBA defender and has the quickness to drive to the hoop and score on the opposite end.


"I thought he looked very good in a workout," Ainge told reporters last week after signing his contract extension with the Celtics. "It was an excellent workout. We had a lot of players in this morning -- I don't know what our number's up to now, 40 or 50. And we've been around the country, traveling and watching all the players around the country, and agent workouts and so forth."

Although he played only one season at Cal before entering this year's draft, he was rated the second top prospect in the country out of high school behind LSU's Ben Simmons.

Ainge's son and Celtics scout Austin Ainge spoke to CSNNE.com about which drills they put Brown through in the team's workout.


"Pick-and-rolls, some post-ups, some transition stuff both on offense and defense, some shooting drills," said Austin Ainge.

According to Brown, he thrived in the Celtics' endurance test -- a full-court run that is done at the end of the session.


"It was great; I definitely finished first," he said. "I don't think anybody was in my realm but it was tough. Doing it after the workout was tough."

Brown averaged 14.6 points and 5.4 rebounds per game at Cal.