Isaiah Thomas is interested in joining Team USA: 'I wish I could get a chance' 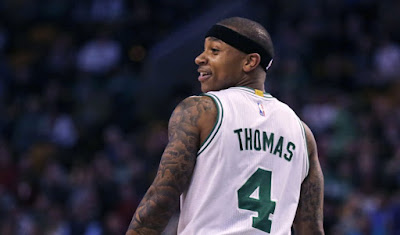 After pushing a #DuranttoBoston campaign last month on Twitter, Isaiah Thomas is now pleading his case for a roster spot on USA Basketball's 2016 Olympics team.

The Celtics All-star guard tweeted out on Friday:


"I wish I could get a chance to play on the USA team! Looking at the history of it I've never seen a small guard get selected 2 even try out"

Thomas makes a good point. In recent history, the smallest guards who were invited for a chance to make the USA roster have been six-foot-three or taller.

The closest someone of his stature was invited to represent USA at the Olympics was the man who Thomas was named after -- Isiah Thomas, in 1991. Rumor has it, Michael Jordan requested that Thomas be left off the roster -- one that was eventually recognized as 'The Dream Team,' after Thomas and the Pistons walked off the floor at the end of the 1991 Eastern Conference Finals.

Listed at six-foot-one, the Hall-of-Fame point guard was the last 'undersized' player to be invited to join team USA.

Guards like Steph Curry and Chris Paul respectively declined their invitations for health reasons, creating space for the team's most contested position on the team -- point guard. Guards like Mike Conley, Kyrie Irving and Damian Lillard are all on the team's updated roster for the Olympics in Rio, which narrows the gap to three point guards.


There's still some time for Thomas to grab a spot. The roster isn't final until the end of June -- players have until then to decline their roster spot.


I wish I could get a chance to play on the USA team! Looking at the history of it I've never seen a small guard get selected 2 even try out
— Isaiah Thomas (@Isaiah_Thomas) June 10, 2016