Kevin Durant will meet with the Celtics on July 1st 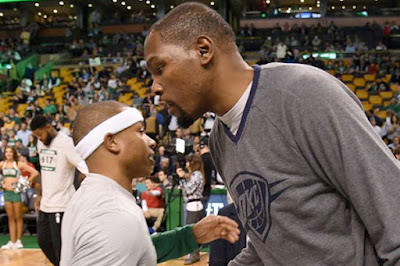 The Celtics will get a shot to lure Kevin Durant to Boston.

They are one of six teams that Kevin Durant will meet with on July 1st when Free Agency begins, according to Adrian Wojnarowski of The Vertical.


The Celtics, Warriors, Spurs, Clippers, Heat, and the Thunder will all get a chance to woo the impending free agent in New York at a series of meetings that will happen through out the day. The Celtics have to be feeling pretty great about this.

It has been reported for months that the Celtics would probably be able to sit down with Durant but now it seems to have been made official.

So the question is what can Danny Ainge do to convince Kevin Durant to leave money on the table and come to Boston?

'Durant's primary criteria for his decision is winning a title', Wojnarowski says


Oh you don't say Kevin, you want championship pedigree in choosing where you want to play the rest of your career?

If I am Danny Ainge and I hear this, I'm going in guns blazing. I would literally bring all 17 Banners from the TD Garden and hang them around the conference room. I would have all 17 championship rings laid out on the table and have Kevin take his pick. I may even just have the 1986 Celtics documentary playing in the background on mute, while your trying to make the pitch.

The thing is Danny is probably not going to be able to talk Durant out of coming to Boston this offseason. There is way to much money at stake. However, Ainge must plant the seed in Kevin's brain and when July 1st 2017 comes around that seed would have blossomed into a field of shamrocks.

Now I know that Celtics fan's confidence in Danny Ainge is a little shaken right now. I'm half expecting him to just totally forget to RSVP or something and then misses out all together, but this has been the chance that Celtics fans have been waiting to here.