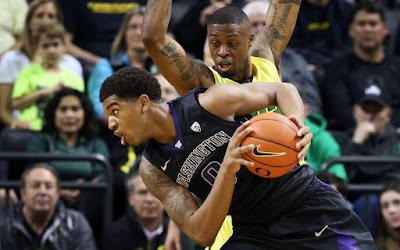 As the Celtics prepare for June 23's NBA Draft, Causeway Street will be reporting on the Celtics' pre-draft workout with prospects for first-round picks 3, 6 and 23.

Buddy Hield and his remarkable display of shooting wasn't the only thing that impressed Danny Ainge and co. when they made their trip to California to work out a pair of potential No. 3 picks.

Along with a workout with Hield, the Celtics brass got a firsthand look at Washington forward Marquese Chriss. In a phone conversation with Boston Globe's Adam Himmelsbach, Ainge had kind words to say about Chriss and his great potential.


"Marquese Chriss is a young and very athletic player that has a lot of growth still to his game," Ainge said. "He has enormous upside."

Chriss has leaped all the up to as high as No. 4 on various mock drafts, including Draftexpress.com and has emerged as one of at least five candidates for the Celtics' No. 3 pick.

At 6'9, he's certainly a raw, athletic big man who can finish at the rim -- but he's more than just a dunker. Chriss is a stretch-four with an explosive first step that he uses to score off the dribble. His defense isn't great, however, it'll be interesting to see which top-10 team will take him in next week's draft.

Chriss averaged 13.7 points and 5.4 rebounds in his lone season at Washington last season.