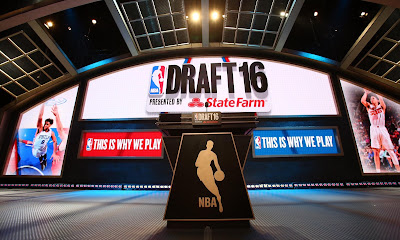 For the second consecutive year Boston Celtics fans were taken on a roller coaster of emotions leading up to draft day only to be dumped on their collective backsides. The C's held eight picks in the 2016 NBA Draft and ended up making one deal to dump two of the picks to a (semi) rebuilding Memphis Grizzlies team. In short, the Celtics laid an egg...again.


President of Basketball Operations Danny Ainge and majority Owner Wyc Grousbeck have already started to hear the collective frustrations of a fan base that is tired of the "slow" rebuild they have embarked upon for the last three seasons and were hoping to see something happen to expedite the process. Last night, that simply did not happen.

NBA insider Adrian Wojanarowski (among others) reported the Philadelphia 76ers offered up a package including forward Nerlens Noel, swing man Robert Covington, and picks 24 and 26 to move up and acquire the 3rd overall pick in last nights draft. The deal was reportedly nixed by Boston because of the lack of inclusion of an "unprotected" 2017 first round choice. To keep it simple, Danny Ainge and the Celtics got greedy and now will face it's toughest fan scrutiny since the mid 2000's.

As for the actual happenings of the draft, the Celtics shocked the collective NBA landscape by taking a majority of its picks in last nights draft, netting them six players and a ton of question marks. The picks ended up being Jaylen Brown, Guerschon Yabusele, Ante Zizic, Demetrius Jackson, Ben Bentil, and Abdel Nader but Celtics fans will take little solace in the addition of more young, unproven players to a roster that is in need of a major talent boost.

While the depression sets in, here are a few thoughts on each pick with a grade below: 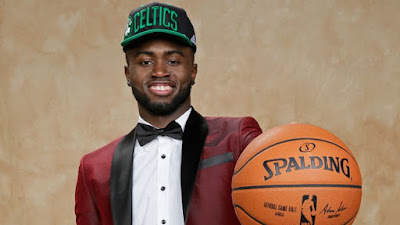 Jaylen Brown G/F, California - Brown had been rumored to be one of the top options coming into draft night for Boston. Depending on additions to the Celtics roster this summer, Brown should have a shot to crack the rotation as a back up wing and challenge Jonas Jerebko and RJ Hunter for Evan Turner's spot on the second unit. Brown's selection would have come with more positive fanfare if Boston wasn't in position to make a deal for a higher quality, NBA proven player and if they weren't chasing a top 4 seed in the Eastern Conference Playoffs in 2016-17.

Brown brings great athleticism [see workout report here], a high basketball IQ, and great work ethic to a Boston squad that he should mesh with nicely (in theory) but his shooting limitations make him a player with a ceiling of 16 to 18 points a night when he reaches his potential. Ultimately, Brown's selection is a risk taken by Danny Ainge. If Brown can't develop into a starter quality wing within the next several years Ainge may have introduced some unneeded scrutiny on his position as General Manager. [Grade: C+]

Guerschon Yabusele F, France - Yabusele's selection further exacerbated an already annoyed Celtics fanbase at pick #16. Yabusele is seen as a potential stretch forward with skills on the perimeter as well as a powerful body to play in the post. Ainge and Boston likely made this pick with Draymond Green in their fantasies but could end up with the French version of Jared Sullinger. Yabusele is expected to stay in France for at least one more season making him a selection that won't help the 2016-17 Celtics at all. His addition could have been a welcomed one but many draft experts didn't rank Yabusele as a top 25 talent in the draft making his selection at #16 premature and again adding pressure to the player and the team. Yabusele as a player, could be a good addition but many believe he could have been had at pick #31 if Boston so chose. [Grade: D+]

Ante Zizic C/F, Croatia - Zizic may have been the best pick Boston made in the 2016 NBA Draft at pick #23. Zizic has been climbing draft boards for weeks and is highly rated by foreign basketball analysts. He doesn't have the skills of a Bender but does have great size (6'11'' 240 lbs) and has an interior toughness that Boston has lacked in recent years. Zizic will likely stay in Europe for another season but could be considered a lottery level talent by the time he arrives in 2017-18. While his selection may be maligned now, Zizic's potential and skills were well worth the risk at pick #23. [Grade: B+] 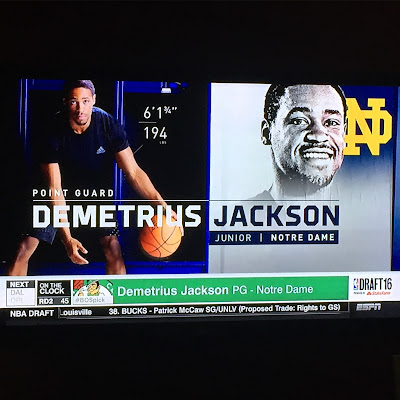 Demetrius Jackson G, Notre Dame - At pick #45 Demetrius Jackson was a much needed (and unexpected) positive for the Celtics. Jackson has played on a fantastic Notre Dame squad and has been the leader and floor general for a team that has been the darlings of the NCAA Tournament the last two years. Jackson is incredibly athletic and blends a great combination of scoring, playmaking, and defending in his game. Jackson had been projected as high as the early 20's on some mock drafts but his fall into the mid second round was a great grab for the Celtics. He will have a tough hill to climb with the crowded Boston back court but his talent and experience should have him challenging for minutes from day one. [Grade: A]

Ben Bentil F, Providence - From pick #23 on, Danny Ainge and the Celtics got back to doing what it does best. Drafting players who are being overlooked by the rest of the league because of circumstance. Selecting Bentil at pick #51 may turn out to be one of the most well liked picks of the draft by Celtics faithful. The Providence product played Robin to Kris Dunn's Batman over the last year at PC and was rewarded with a second round selection to a team that is short on front court depth. Bentil will bring a solid athletic, physical presence to the Celtics along with a good shooting stroke. He still has some serious development but Bentil has a chance to challenge for minutes in 2016-17 under the right circumstances. The stretch forward has some ball handling skills as well and should fit nicely in Brad Stevens spread offense. If Bentil can defend at an NBA league average level, he could end up being Brandon Bass 2.0. [Grade: B+]

Abdel Nader F, Iowa State - The 58th pick will be classified as a "low risk/moderate reward" selection for Boston. Nader will have a tremendously difficult time making the 2016-17 team which leads many to believe he is another "draft and stash" player who will begin his NBA journey in Europe (similar to Marcus Thornton from the 2015 draft). Nader is an undersized forward who does have some nice skills but will need to improve on a multitude of levels to make the Celtics roster in the future. [Grade: C -]

Trade [Picks #31 & #35 for a lottery protected 1st rounder in 2109 from the Memphis Grizzlies] - While the deal had the Celtics passing on some intriguing talents like Diamond Stone, Tyler Ulis, Malcolm Brogdan, Deyonta Davis, and Cheick Diallo, Boston had to shed some of it's picks. The ability to (essentially) trade up by dealing two second rounders adds more draft capital to a team that is in no short supply of picks. Boston gains more draft day flexibility and should be able to cash in on the pick by either taking the pick a few years down the road or adding the pick as a potential sweetener to a future trade. Either way, the deal was necessary and ends up being a positive in my eyes.

As mentioned in the player reviews, Ainge and the Celtics had a very solid draft from pick 23 on. The risks at #3 and #16 will be the major points of contention for Boston fans and analysts alike, not because of the players but because of where the Celtics should be in their rebuilding process. The inability to make a deal for a ready made talent like Nerlens Noel will heap pressure on Jaylen Brown, Guershon Yabusele, Danny Ainge, and the Celtics organization alike.

Now, we can only hope the picture is clearer and brighter for the 2008 NBA Champion mastermind because otherwise, June 23rd, 2016 may go down as the day "the rebuild" all went wrong.