Report: Celtics trade talks with Utah for Gordon Hayward are heating up 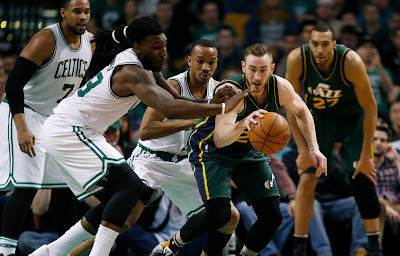 The NBA trading season has officially begun, and according to one source -- the Celtics are pushing hard to acquire Utah forward Gordon Hayward before Thursday's NBA Draft.

The Jazz are asking for a lot in exchange for Hayward -- who according to Hoopscritic.com, wants out of Utah. The story broke early Wednesday morning, and by the afternoon it was reported that the Celtics are trying very hard to close a deal.


Hayward has expressed his unhappiness in Utah and the Jazz are attempting to accommodate him per league sources...
— Brian Geltzeiler (@hoopscritic) June 22, 2016

The Jazz are putting a steep price tag on Hayward. It remains to be seen if Boston will pay it but Brad Stevens wants Hayward...
— Brian Geltzeiler (@hoopscritic) June 22, 2016


Hayward, who Celtics head coach Brad Stevens coached in college at Butler -- is coming off one of the best seasons of his six-year career. He averaged 19.7 points, while shooting 43 percent from the floor last year.

There's no word on what Utah's "steep price tag" entails but it most likely includes the Celtics' No. 3 pick, Avery Bradley and another rotation player -- possibly Marcus Smart.

After the Hawks dealt Jeff Teague to the Pacers in a three-team swap that included the Jazz acquiring George Hill from Indiana and the Hawks getting the No. 12 pick from the Jazz, the Celtics are hoping to be one of the next teams to complete a trade before Thursday night.

The Knicks also landed the 2011 NBA MVP Derrick Rose, Justin Holiday and a 2017 second-round pick from the Bulls in exchange for Robin Lopez, Jose Calderon and Jerian Grant.

Hayward has one year left on his contract that's worth $16 million, along with a player option for the 2017-18 season.